On Tuesday 6 December 2016, hosted by David Rutley MP for Macclesfield, The Church of Jesus Christ of Latter-day Saints held their annual Family Values Award Luncheon to acknowledge members of the community who make significant contributions in support of the family. The Church recognises the family as the most essential unit of society and reveres those who work diligently to strengthen homes and families throughout the world.

Past recipients have come from many religions, including Muslims. This year the lunch honoured two strong advocates of family values: The Reverend Prebendary Rose Hudson-Wilkin and Jim Shannon MP.

The Reverend Prebendary Rose Hudson-Wilkin is a Church of England Priest. Born in Montego Bay, Jamaica, she left for England to train with The Church Army, and was commissioned in 1982. In 1991 Rose was ordained to the Diaconate, and later ordained to the Priesthood in 1994. Since November 2014, she has been Priest in Charge of St Mary-at-Hill, City of London. She additionally holds the roles of Chaplain to the Speaker of the House of Commons and Chaplain to the Queen. Rose met her husband Ken Wilkin when she was training at The Church Army College. He is Chaplain to Downview Prison and the couple have two daughters and a son.

Jim Shannon has been involved in local politics in Northern Ireland since the mid 1980’s, serving as a Local Councillor and Mayor. He was elected to the Northern Ireland Assembly for Strangford in 1998 and subsequently re-elected in 2003 and 2007, representing the Democratic Unionist Party. Since 2010, Jim has been the Member of Parliament for Strangford. Jim is married to Sandra and they have three sons. They live on the family farm outside Greyabbey. Jim is a member of the Baptist Church, and a member of the Ulster Farmers Union. He is also the former chairman of Ards District Policing Partnership and sits on the Board of Governors at Glastry College.

How the CMF came to be there

There is an important message in how the CMF members came to be at the lunch.

Five years ago at the Conservative Christian Fellowship’s annual Wilbeforce Lecture, Mohammed Amin met someone who was a Public Affairs advisor for The Church of Jesus Christ of Latter-day Saints. They exchanged cards and stayed in touch. From that chance meeting Mohammed Amin and Lord Sheikh have built up a strong personal relationship with senior Mormons in the UK.

There are several messages, some small, some very important:

Mohammed Amin engrossed in conversation with Malcolm Adcock who is responsible for European Public Affairs for the Church. 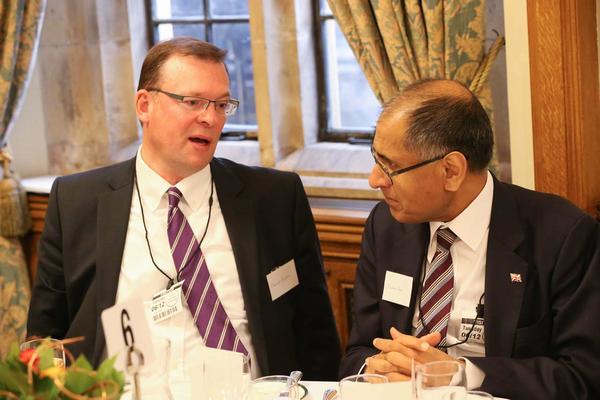 In the group photo below, from left to right: 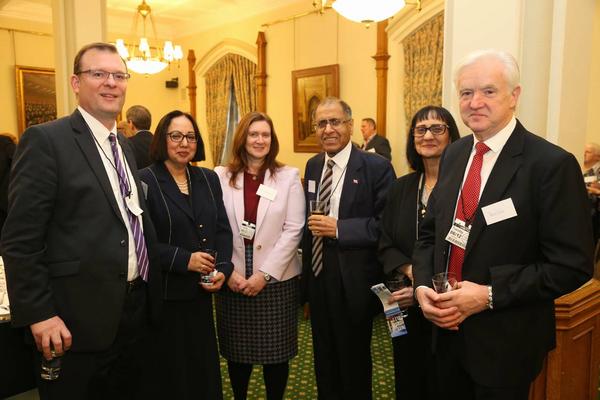