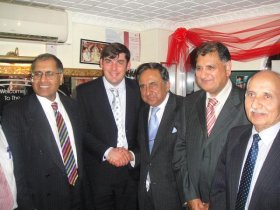 Lord Sheikh, Chairman of the Conservative Muslim Forum, and Mohammed Amin, Vice Chairman, attended a dinner organised by Ben Jeffreys, the Conservative Party’s Prospective Parliamentary Candidate for Cheadle with leaders of the Muslim community in Cheadle.