In the Queen’s Birthday Honours List published on 11 June 2016, CMF Chairman Mohammed Amin was awarded an MBE (Member of the Order of the British Empire) for services to Community Cohesion and Inter-faith Relations in Greater Manchester.

At their individual expense, the members of the CMF Executive hosted Mohammed Amin and his wife Tahara to a celebratory dinner on 14 September 2016 at Darbaar Restaurant in London. (Mohammed Amin also invited some personal guests at his own expense.) The principal organiser was CMF Secretary Faruk Miah.

At the outset Lady Sheikh and I would like to congratulate Mohammed Amin on being awarded the honour of an MBE.

I met him about 10 years ago and I have always been impressed by his dedication and for being focused in whatever he undertakes.

His parents were not wealthy and despite this his father undertook community work and was one of the persons who founded the Manchester Central Mosque in Victoria Park, Manchester.

In fact I understand that the last cheque his father wrote before he died was in aid of a charity which was set up in memory of a boy who was murdered in Manchester.

Mohammed Amin likes to be called Amin and I will now refer to him as Amin.

Amin undertakes a lot of community work and I believe this is in his DNA and a quality that he has inherited from his father.

I understand that he was about 18 months old when he was brought to England; when he arrived in the country he threw a tantrum and wanted to go back to his uncles and be with his pet goat.

I am very glad that he did not go back to his pet goat otherwise we would have missed his presence here!

Cambridge in fact recognised his achievements, and in 2014 he was elected as the Clare College Alumnus of the year.

I was indeed pleased to host a dinner in his honour when he received this accolade.

After leaving Cambridge, Amin became a teacher but subsequently qualified as a Chartered Accountant.

I am very much interested in Islamic finance and I do appreciate his knowledge and expertise.

I understand he is a very good chess player. I am not very good but hope we can have a game. In regard to this, even Lady Sheikh beats me, so I have stopped playing with her!

Amin is a very strong family man and he has a very dedicated wife in Tahara. In fact Tahara was involved in preparing the submission to the Honours Committee as a result of which Amin received the MBE.

I understand however Tahara kept this a secret until the last moment, I am not sure how she did this.

Lady Sheikh and I were in Geneva where I was attending a Conference and a text arrived just after midnight when the announcement was made for his honour.

Amin has a lovely family who have all done well and in fact one of his daughters cooked us a delicious meal when Amin and Tahara invited us to their flat in London.

As you know I founded the Conservative Muslim Forum and when I decided to give up the Chairmanship I felt that Amin would be the right man to follow me.

I found him very loyal and hardworking member of the inner circle of CMF.

I would like to thank him for carrying out ably the duties of the Chairman.

I understand he wears a Union Jack which proves his loyalty to this country.

Amin does a great deal of community work, promotes interfaith dialogue and building of stronger connections between all racial and religious groups. He deserves the MBE award and Lady Sheikh and I would like to present him with this piece of glassware to congratulate him on being granted this award. 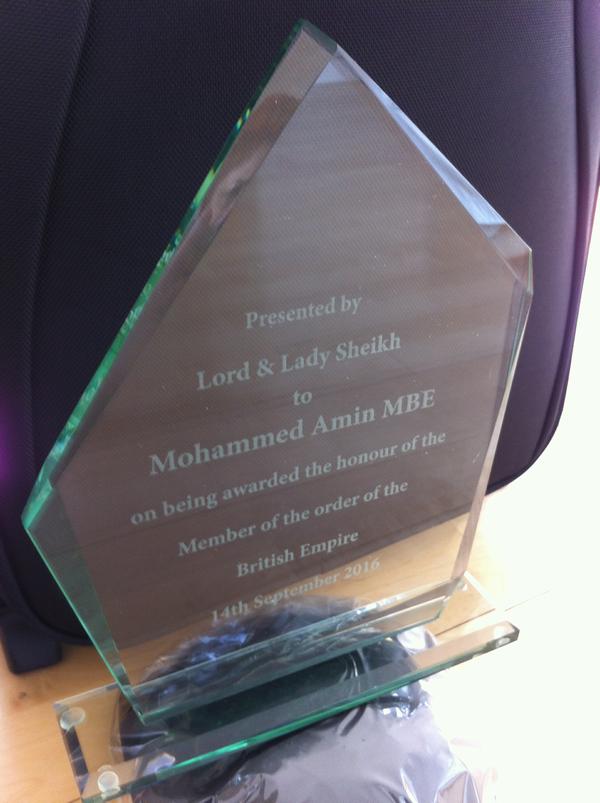 Faruk Miah asked me to talk for 5-10 minutes about my life and especially what I do in interfaith work which led to the MBE award. Before I do, I want to give some thanks and I can never resist giving people advice!

I want to thank the Conservative Muslim Forum Executive, and especially Faruk Miah, for organising this dinner and hosting me and Tahara. I also want to thank my own guests for coming. I will tell you about them in a moment.

Let me begin with the advice. I talk to young people a lot. When you are aged 65, most other people are young!

Tonight, I will limit myself to just one piece of advice.

The advice is that building, and keeping long term relationships is vital.

You can see that around the CMF Executive. We do have some new people. You always need new people or you stagnate. However, we also have a great deal of continuity. The people who joined four years ago now feel like veterans.

Lord Sheikh founded the CMF 11 years ago and I have benefited from his advice for the last decade. Nash Jaffer I have known since the early 2000’s since we were colleagues at PwC.

That advice leads on to my guests.

Imran Razzaq, is a chartered accountant and a technology expert. I have known him for 38 years, from the time he was aged 9. The reason is that his late father organised for me and Tahara to meet to see if we wanted to get married.

Idrees Qureshi is also a computing expert. I have known him for about 50 years as a friend from my teenage years along with his elder brother.

The longevity record goes to Nisar Mirza. Nisar has a PhD in electronics and designs flight control systems for airliners. The next time you fly in an Airbus, pray that he did a good job! I have known Nisar for about 55 years, since we both of us were aged about 10.

I have a confession to make. I was a spoilt brat when I met Tahara. She is the one who straightened me out. My debt to her is limitless.

In the words of the song made famous by Bette Midler: “You are the wind beneath my wings.”

My life and my interfaith work

Now back to what Faruk Miah wanted me to talk about, my life and my interfaith work.

My life is very simple. I was born in Pakistan and came to the UK at the age of 1 ¾.

My parents were very poor, and illiterate. However, they understood the value of education. When you have no education, you know how important it is. My parents also doted on me.

I inherited great genes for intelligence and also was brought up by my parents with the right attitudes about learning. I passed the 11+ and went to a grammar school, and from there to Cambridge to read mathematics.

After one year as a teacher, I trained as an accountant and became a tax specialist. In 1990 I became the first Muslim partner in Price Waterhouse in the UK. I retired at the end of 2009.

My interfaith work has mostly been with the Jewish community. The reason why, is a religious one.

When you look at what the religions teach, Islam and Judaism are closer to each other than any pair of religions that I know.

Muslims and Jews in the UK have similar practical concerns: circumcision, halal and kosher food, non-invasive post-mortems, faith schools etc. I believe the two communities can be more effective if they lobby together rather than lobbying separately. That is why in 2005 I was one of the people who helped to set up the Muslim Jewish Forum of Greater Manchester.

The key principle is that we are about Greater Manchester, not about the Middle East.

The power of lobbying together was shown in 2015 by my petition to protect halal and kosher slaughter. Because the Muslim and Jewish communities got behind the petition, we got our 100,000 signatures in nine days. It took the British Veterinary Association nine months to get their 100,000 signatures.

However, while the original reason for getting involved was a practical one, something else has come out of it as well. I have made many new friends. It was one of the women members of the Muslim Jewish Forum Executive who secretly organised the MBE nomination.

With that, I think I have exhausted the time allowance that Faruk Miah gave me.

My final piece of advice is very simple.

Always do what you believe is right and good for the country without worrying about yourself.

As mentioned above, Lord and Lady Sheikh presented Mohammed Amin with the pictured glass trophy. The Executive also presented him with a silver salver, which is pictured below. 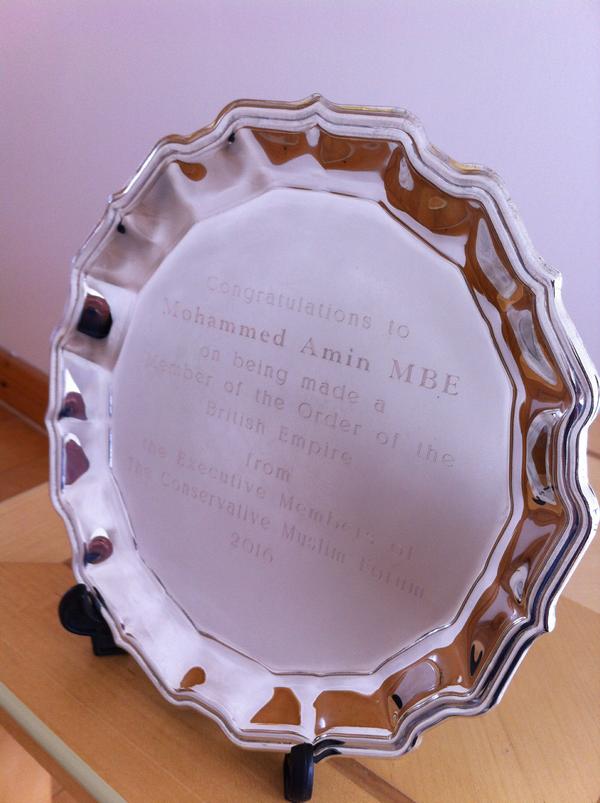