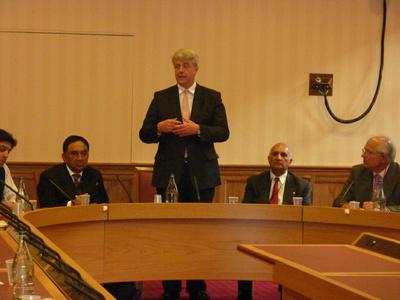 The Conservative Muslim Forum held a meeting last year when the Secretary of State for Health Andrew Lansley outlined the Government’s proposals for major changes in the NHS and its service delivery.  Lord Sheikh invited him back to speak at our event on 13th June 2012 for update on the proposed changes.

Opening the meeting, Lord Sheikh said that major and fundamental changes were much needed for the good of everyone’s health and this has been achieved by the Health & Social Care Bill becoming law.

Dr Farrukh Hussain, Chair of the Health Group of CMF and also Chair of the Pakistani Professionals’ Forum introduced the speaker to the room which was full with a keen audience.  He said that Andrew Lansley had succeeded in the face of great opposition from the Nurses Union, the BMA, GPs, Hospitals, Doctors and Consultants, in fact from the entire medical establishment.  He deserved full credit for that achievement.

The Health Secretary highlighted that tele-health will support the redesign of health services, stating that “Tele-health is not just the technology; it’s the way to redesign the service.”

He added that strong leadership would be needed from within the service for the changes and involving a GP & Clinical Led Patients and Intelligence Directorate, a National Commissioning Board, and a Special Health Authority.

The future is in computers and monitors on the desks of all GPs.  One for accessing databases such as patient records; the other for remote consultations to make life easier for both doctors and patients by sharing records electronically between GPs and consultants. The sharing of records will allow consultants to email a provisional opinion within 24 hours, and that technology will continue to change medicine further.  There could be such changes as consultations via video-link.

He assured the audience that the health commissioning process is on track and that the NHS budget is not to be cut. Instead savings will be made to help increase spending on NHS facilities in the areas and specialities which need to be developed to improve health facilities.

In the picture above, Andrew Lansley is speaking with Lord Sheikh on his right and Dr Hussain on his left.