Mohamed Iltaf Sheikh was born in Kenya on June 13, 1941, the son of Mohamed Abdullah Sheikh and Kalsum Ara Sheikh; the family originated from the Punjab, India. His father dealt in coffee and cotton.

He was brought up in Uganda, where his father also built a property portfolio. Moving to London aged 20, he joined Sun Alliance as a trainee broker, taking his qualifications at Holborn and City of London colleges. He moved to Household & General Insurance in 1966, and in 1969 to Guardian Royal Exchange, before joining Camberford Law.

Of his family’s arrival from Uganda in the clothes they stood up in, he recalled: “Idi Amin took everything from us, except what we had in our minds. Because we were doing very well in Uganda, we came here and we were prepared to work hard. What we did in this country was perhaps what we had learned in Uganda, and that is to use our brains, to use our initiative, and we have done very well.”

As well as driving the success of Camberford Law, Sheikh became the chairman of several property companies and a director of other businesses.

In 2021, he was added to the Indiaspora Government Leaders List, which recognises 200 public figures of Indian heritage in countries around the world.

Sheikh was the author of An Indian in The House: The lives and times of the four trailblazers who first brought India to the British Parliament (2019) and Emperor of the Five Rivers: The life and times of Maharajah Ranjit Singh (2021). At the time of his death, he had nearly completed a historical novel.

He chaired the Sheikh Abdullah Foundation and was a patron of Orphans in Need.

He was elevated to the House of Lords in 2006 and was an active Peer regularly speaking in the House of Lords on a variety of subjects. His work included participation in various All Party Parliamentary Groups (APPGs) including the APPG for Islamic and Ethical Finance in British Parliament.

Lord Sheikh was a patron of several Muslim and non-Muslim organisations and was actively involved in strengthening relationships between various racial and religious groups. His Coat of Arms signified the values of education and gives a message that Islam is a religion of peace.

In recent years, Lord Sheikh’s expertise and guidance was instrumental in supporting the Party to tackle accusations of Islamophobia. He was always an advocate for promoting the Party’s shared values with the Muslim community of family, hard work, compassion, sacrifice and opportunity. Thanks to his help, the Party was able to host its first ever Iftar reception at CCHQ this year, reflecting the sheer strides we have made in our engagement with the community. Given the success of the Iftar reception, I hope it will be made an annual event, which will be a fitting tribute to Lord Sheikh’s memory.

Lord Sheikh, a businessman, academic, philanthropist and writer. His loss will be felt by those of us in the House of Lords and the many lives he touched through his work in business, academia, philanthropy and through his writing.

(This post was taken from Lord Dolar Popat’s comments in the Asian Voice on the passing of Lord Sheikh), link below. 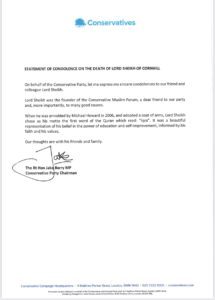