The Centre was also recently visited by HRH Prince Phillip who in his inimitable style asked the women “Who do you sponge off?” The Daily Mail story at this link shows that they took his question with the humour intended! The story mentions Nusrat Zamir who is the Group Co-ordinator of the Network and a Trustee of the Community centre.

The purpose of the CMF visit was to talk about political engagement. The size of the group, about 10 women, enabled excellent discussion. We were delighted to learn that every one of the women present had voted in the general election on 7 May.

If you would like someone from the CMF to come and talk to your group, please contact Shaheen Thantrey on mail@conservativemuslimforum.com

Below is a photograph of Shaheen Thantrey addressing the group which also shows that Mohammed Amin needs to invest in a comb! Below the photograph is a copy of Mohammed Amin’s prepared remarks. (Most of the session was taken up by questions and answers.) 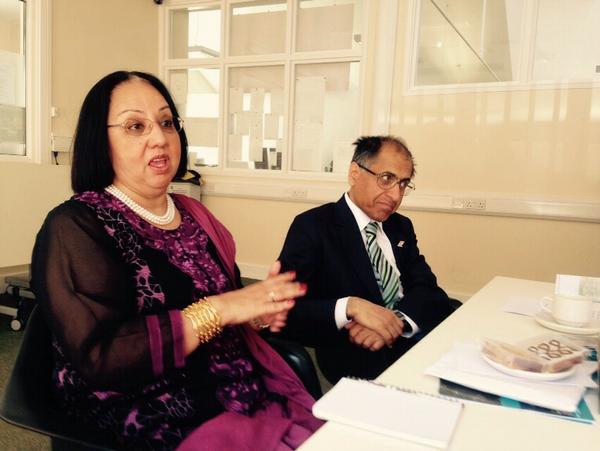 Good morning and assalamu aleikum. I’m going to talk for about 10 minutes, so that we can use the rest of the time we have for questions and answers.

I want to cover six things:

1. A bit more about myself

I was born in Pakistan, and came to the UK at the age of 1 ¾. My parents were very poor and illiterate, and I grew up in the slums of Manchester.

Despite this background, I went to a grammar school, and obtained a degree in mathematics at Clare College Cambridge. I also got a Post Graduate Certificate in Education from Leeds University.

After a year teaching, I trained as a chartered accountant, and specialised in taxation. In 1990 I became the first Muslim partner in Price Waterhouse, and in 2003 I was elected to PricewaterhouseCoopers’s Supervisory Board. I retired at the end of 2009.

Since then, I spend my time helping society. I realised when I went on Hajj in 2002 that this is what I wanted to do for the rest of my life. I am active in many organisations including being:

I also write published articles regularly, and appear in the media. For example every six weeks I do a religious broadcast on BBC Radio Manchester. You can learn much more about me by visiting my website: www.mohammedamin.com Because of what I do for the community, Clare College chose me as its Alumnus of the Year for 2014.

I want you to imagine something. Then I want to ask you a question.

My question for you is this. How likely is God to make this man rich and successful?

My own view is that it is pretty unlikely. I believe that if you are sincere, God will help you in your efforts. But you have to be making the efforts.

3. Achieving personal success for yourselves and your children

My story ties in directly to this. The obvious messages are about studying hard and working hard.

However we all know about people who are highly educated but can’t get a job. There is real discrimination in society.

However, although it is real, there is far less than people make out. Often, we create our own mental barriers. About 80% of this country consists of white people. About 95% of this country is non-Muslim.

How much of your own time is spent interacting with people from other backgrounds? Are you a member of mainstream organisations such as the National Trust? How many of you are in the Womens’ Institute? If you believe that this is your country, what are you doing to make it a better place? If you are a professional, how involved are you with your professional body?

4. Achieving change in our society

Put your hand up if you are completely satisfied with everything about this country, and don’t think that anything needs to change.

If you want things to change, you are going to have to do something. What you do depends on your time, your skills and your finances.

There is an endless list of things you can do. How much you do is up to you. Doing nothing is not an option, unless you think everything is perfect already.

5. Now let me explain why I joined the Conservative Party over 30 years ago

Unlike the imaginary young man in my story, I have always believed in getting involved. However I wasn’t always a Conservative. I became one over 30 years ago.

6. Finally, what does the Conservative Muslim Forum do?

Firstly, we are not a lobby group.

With that, let me throw it open for questions.