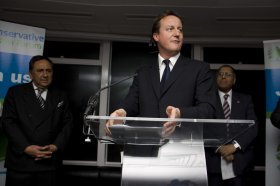 Lord Sheikh, Chairman of the Conservative Muslim Forum, Mohammed Amin, Vice-Chairman and members of the Executive Committee of the Forum hosted a reception and buffet dinner in the celebrous venue at Altitude 360, 29th Floor, Millbank Tower, 21-24 Millbank, London SW1.

The Rt. Hon. David Cameron MP was the guest of honour and the event was attended by over 500 people which included members of Muslim and non-Muslim communities. The guests included leaders and members of different communities, Conservative Parliamentarians and Prospective Parliamentary Candidates. There was a strong presence of women and a cross section of ages.

It was a glittering occasion and a unique gathering and the guests had lovely views of London at night.

Before speaking David Cameron met the guests who warmly welcomed him.

The occasion started with a recital from the Holy Quran by Private Taju Deen in Arabic and the English translation by Captain Afzal Amin, both of the British Army. The recital was from the Chapter on Mary, Mother of Jesus which related to the birth of Jesus Christ.

There were speeches by Lord Sheikh and David Cameron and the master of ceremonies was Mohammed Amin.

The event was recorded and can be watched below in two parts.