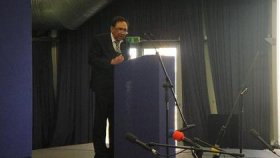 Lord Sheikh spoke at the Deen Fest held at Alexandra Palace organised by the JAN Trust. The event was held to celebrate the positive contributions Muslims have made to the UK and to promote interfaith dialogue.

Lord Sheikh referred to the fact that Muslims have done very well in every walk of British life and contributed to the advancement and wellbeing of the United Kingdom. Lord Sheikh explained the true meaning of the word “jihad” and stated the fact that suicide bombing is forbidden in Islam.