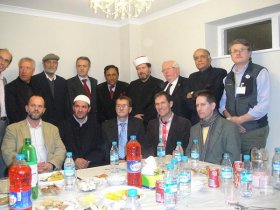 Lord Sheikh, Chairman of the Conservative Muslim Forum, attended evening prayers and Iftari organised by the Kosova Muslim community at their mosque in Maida Vale. The event was hosted by Sheikh Zymer Salihi (President and Imam of the Kosovo Islamic Centre UK) and attended by His Excellency Muhamet Hamiti, Ambassador of the Republic of Kosovo.

Lord Sheikh also spoke at the event and praised the Kosovans on their achievement in setting up a beautiful mosque and centre. He made the point that Britain has accepted the independence of Kosovo and admired the resourcefulness of people from Kosovo who have worked very hard and made a life for themselves in the UK.

He also said that he was touched by the warmth and kind hospitality shown to him by the entire congregation.