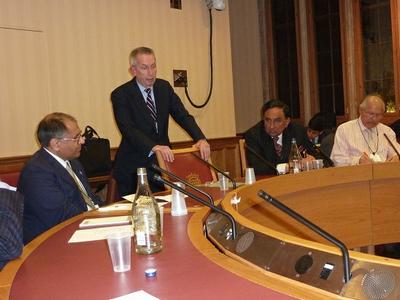 Over 50 people attended a talk by Mr Terry Smith, Chief Executive of Fundsmith LLP and also Chief Executive of Tullett Prebon plc, on the subject “The most important mistakes people make when managing their savings”. The meeting held in the House of Lords was chaired by Mohammed Amin, CMF Vice Chairman, and hosted by Lord Sheikh, CMF Chairman. CMF Executive Member Mike Mogul gave the vote of thanks.

Mr Smith explained that investors are often their own worst enemy, by following fads, trading too often and buying investments they do not understand. He also explained the disciplined investment approach he has followed for many years while managing the Tullet Prebon plc pension scheme and now in managing the Fundsmith Equity Fund.

There were a number of questions from the audience, and their interest was further evidenced by the number of people who stayed behind to talk informally with Mr Smith and his colleagues.