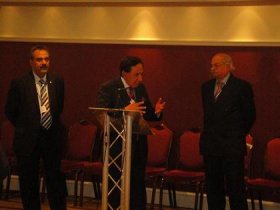 Lord Sheikh (Chairman of CMF) spoke at the event and praised the achievement of the Pakistani community and the Muslims in the UK. Arif Hussain (Member of CMF Executive Committee) was also in attendance.