The EU Referendum: Remain or Leave?

The EU Referendum: Remain or Leave?

The Conservative Muslim Forum as a body takes no position on which way people should vote in the EU Referendum. However we believe it is vitally important for people to learn about the facts and then vote after thinking about the arguments on both sides.

Accordingly, on 9 May 2016 we held a debate so people could learn about the issues and discuss them with our two speakers.

The event was chaired by CMF Executive member Mike Mogul.

As with almost all CMF events, it began with a Quran recitation by Imam Shakeel Kunwar. He recited Quran 49:13. After the recitation, CMF Chairman Mohammed Amin read out the English translation taken from “The Study Quran” published by HarperOne:

Truly We created you from a male and a female and We made you peoples and tribes that you may come to know one another.

Surely the most noble of you before God are the most reverent of you.

Mohammed Amin explained that he had chosen this verse because it emphasises our common humanity, as remembering that is critical when dealing with something that can be as divisive as the EU Referendum.

The order of the speakers was chosen by coin toss to avoid bias.

The first speaker was Chris Philp, MP for Croydon South, elected to Parliament in May 2015. He explained why the UK should Remain in the EU.

The second speaker was Saqib Bhatti, a chartered accountant, a board member of Vote Leave and Joint Secretary General of Muslims for Britain. He explained why he was campaigning for Britain to leave the EU.

After the speeches there was an extensive question and answer session.

Before he gave the vote of thanks, Mohammed Amin took a straw poll. Of the audience, 18 said that at present they were inclined to vote Remain and 6 to vote Leave.

In the picture below, from left to right, are: 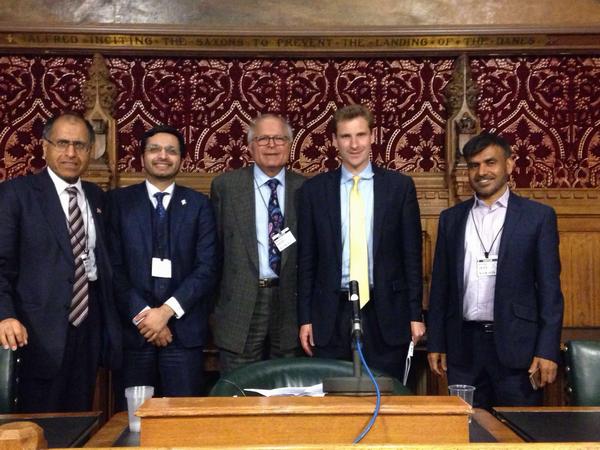