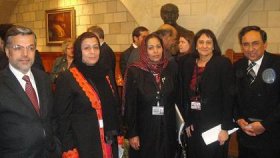 During his discussions Lord Sheikh expressed pleasure that there were now women Members of Parliament and steps were being taken for the empowerment of women. Lord Sheikh also said that he supported initiatives to build infrastructure, provide help to the agricultural programmes and win over the Taliban.