This year around the world, nations, communities and individuals of all ages are coming together to mark, commemorate and remember the lives of those who lived, fought and died in the First World War. The First World War claimed the lives of over 16 million people, involved over 100 countries from Africa, America, Asia, Australia and Europe. It had an impact on the lives of everyone in every town and village in our country. One hundred years later, we are all connected to the First World War, either through our own family history or because of the way it changed the history of our communities.

On 16 July 2014 CMF Executive Member Altaf Hussain took part in an event to commemorate and pay tribute to the sacrifices made by the Bridgend County Borough’s war heroes with the unveiling of a tribute to them in Aberkenfig. Bridgend County Borough’s Mayor Gary Thomas and Janice Gregory, AM for Ogmore, were both present for the official unveiling of the mosaics, along Councillor Huw David, Cabinet Member for Children, Councillor Altaf Hussain, Councillor, D Baker, Councillor A Clough and many young people. In the group photo below, Altaf Hussain is on the right hand side amongst the ladies. 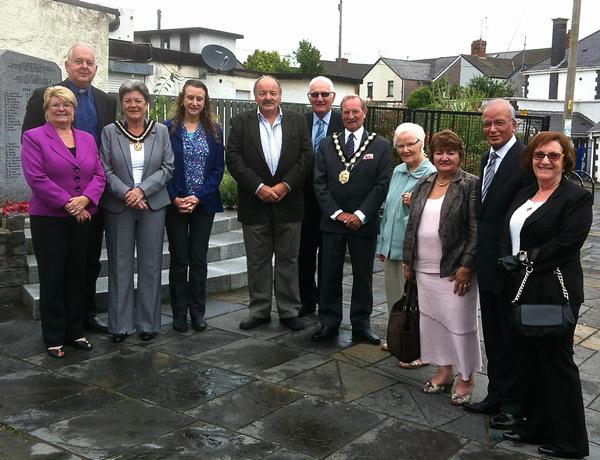 Three colourful mosaics, sponsored by Newcastle Higher Community Council, designed by local school children, under the guidance of artist Justine Stroud, of Primary Colours, have been installed in the village square to mark the centenary of the First World War. They are shown below being unveiled. 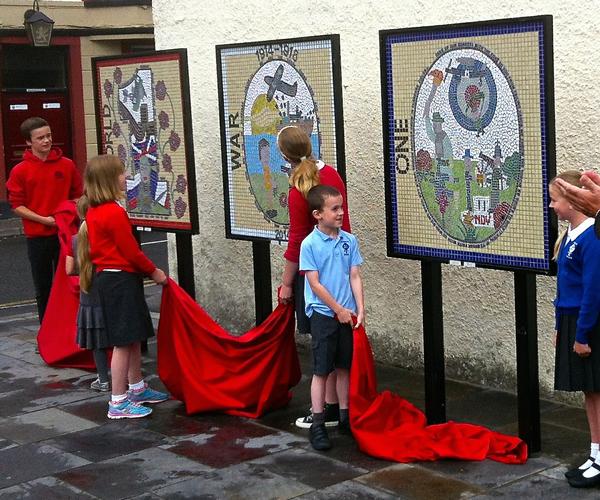 The main reason behind making the mosaic was to mark the 100 year centenary of WW1, using one number for each mosaic. Three schools took part and each school had one number out of 100. Each mosaic has a border, to represent the UK and the British flag and children’s designs suiting the images expressed in the poem Flanders Field by Canadian Lieutenant Colonel John McCrae, inspired by his service during the 2nd Battle of Ypres. Each mosaic is based upon one paragraph of this poem which surrounds the number.

In Flanders fields the poppies blow

Between the crosses, row on row,

That mark our place; and in the sky

Scarce heard amid the guns below.

The word WORLD is included on the left hand side not only saying world war one over the three mosaics but also is relevant because of the three flags behind the soldier from around the world, the British flag central, the French flag on the right and the Russia flag on the left(this design was used until during WW1, now changed).  Russia and France were allies with Britain during WW1.  The mosaic has poppies, a cross, a bird and a gun to correspond with the wording from the poem. 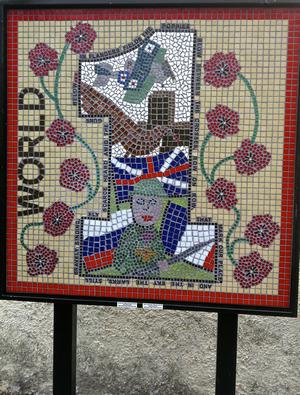 We are the Dead. Short days ago

Loved and were loved, and now we lie

A man stands with a tear at a grave, the sun is setting and a heart is on the cross corresponding with the wording above from the poem.  The word WAR is used on the left hand side, the scene shows sorrow and conflict caused by war. 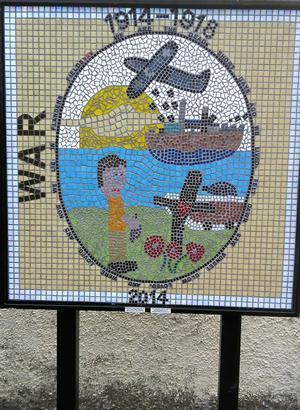 Take up our quarrel with the foe:

To you from failing hands we throw

The torch; be yours to hold it high.

If ye break faith with us who die

We shall not sleep, though poppies grow

The word ONE is used on the left hand side, the scene shows victory and peace, one can also mean united as one or one people.  The RAF WW1 symbol is used in the sky to depict the brave soldiers who fought in the war. A soldier is holding up a torch to denote victory, and poppies to represent the fallen soldiers as well as a English rose, a Scottish thistle, a Welsh daffodil and a Irish clover is pictured on the bottom of the mosaic to represent people of all areas in the UK.  These images again correspond with the wording from the poem above. 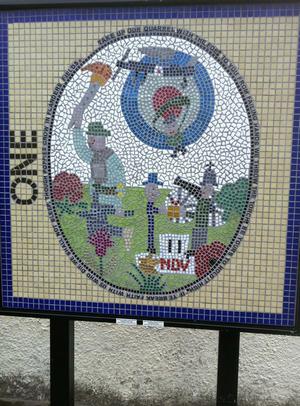