On Wednesday 30 July the Conservative Muslim Forum organised a  gathering of Buddhists and Muslims for dialogue about concerns regarding recent events in some parts of Sri Lanka.

People from all walks of life around the country, including Sri Lankans from all communities, Sinhala, Tamil, Muslim and also their British friends and well-wishers heard from  a distinguished panel of speakers hosted by Lord Sheikh, President of the Conservative Muslim Forum.

The initiator of this event Mrs Ajantha Tennakoon, an Executive member of the Conservative Muslim Forum conducted the meeting, welcoming everyone and spelling out the aims and objectives of the meeting. “The whole purpose of the meeting is to highlight the long history of harmonious relations between Muslims and Buddhists that has existed for centuries and also the religious commitment to justice, peace and humanity shared by both religions” she said. She dedicated this event to her late parents especially her father (Mr. Lional Sarath Edirisinghe) from whom she learnt how to serve the people, how to respect every religion and race and how to face injustice in a non violent, calm manner.

Lord Sheikh is a long standing friend of Sri Lanka and has visited the country many times. He has been impressed by the achievement of peace in the country and is a great supporter of both communities. He said “Muslims who have been contributing to social, political and economic life of the country from 7th century onwards have always been and continue to be friends of all communities and the recent developments are therefore unfortunate and unnecessary.” Lord Sheikh commended all of the peace building efforts of the Sri Lankan government and hoped that Sri Lanka will prosper with all its richness of diversity.

Dr Chris Nonis, the Sri Lanka High Commissioner in London gave a lengthy analysis of post war Sri Lanka and said he is yet to meet a single communally minded Sri Lankan. He attributed the recent unrest to misunderstandings and hoped that we could soon make up for all the lost trust and continue as members of a united Sri Lanka. He said that, situated between the East and the West, however small, the island is one whose potential to be one of the leading nations of Asia must not be underestimated.

Dr Desmond Biddulph the president of the Buddhist Society said that Buddhists must set an example by following the peaceful teachings of the Buddha and learning to co-exist with all communities. The Buddhist society is committed to supporting all communities in the spirit of friendship and brotherhood.

Mr Ahmed Zimar Sivardeen, President/Chairman of the British Sri Lanka Association reflected on the long standing friendship between Buddhists and Muslims and said it is unfortunate to see that it has been affected in recent times but it is never too late to rebuild it.

Dr Sunil Kariyakarawana Buddhist Chaplain to British Armed Forces said people of faith should be able to reconcile any differences they have. Both Buddhists and Muslims are strongly committed their respective faiths and reflect on the great teachings of both religions. When we genuinely value and appreciate each other’s friendship we can learn to respect each other and overcome any hurdles. Buddhists have been admiring the contributions that the Muslim community makes in different spheres of Sri Lankan life and Muslims have always valued their Sri Lankan identity and friendship with Buddhists. The best singers of Buddhist vocals are a devout Muslim father and son duo: Mohedeen and Ishaq Beg. They are admired by all Buddhists who flock to listen to them. So we must learn to talk from heart to heart than from intellect to intellect. The only way to respond to extremism in any society is to strengthen the relations between peace-loving moderate Buddhists and Muslims. Most atrocities in the world are happening today not because of a small minority of people who perpetrate them but because a vast majority of moderates silently endure them he said.

Mr. Amal Abeywardene of Conservative Friends of Sri Lanka also emphasised the need to strengthen relations between moderate forces and Conservative forums like this could facilitate that dialogue.

A very active Q&A session was followed by vote of thanks from Mrs Ajantha Tennakoon who thanked all the speakers and all participants for their support by attending this successful event. She also thanked her colleagues in the CMF, particularly Lady Sheikh and CMF Executive Secretary, Shaheen Mahmood for their tireless engagement in organising the event.

The event was closed after prayers by Imam Ali Omarm the Muslim Chaplain from the UK Ministry of Defence, and Seth Pirith chanting by the Most Venerable Daranagama Kusaladhamma Thero, Director General Sri Lankan Buddhist TV and the Abbott of the Plaistow Sri Sambodhi Buddhist Meditation Centre.

Below is a group photograph of the speakers. 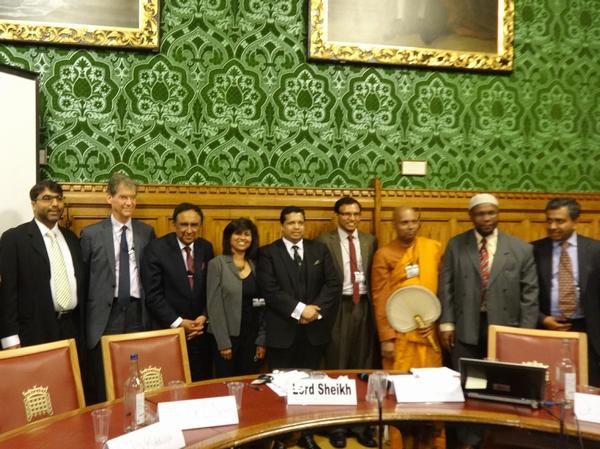