Campaigning at the Newark by-election

Campaigning at the Newark by-election

A historic by-election was held in Newark on 5 June 2014 after the resignation of the previous MP Patrick Mercer. Although Mr Mercer’s majority in 2010 was 16,152 the by-election was expected to be hard fought. Many members of the Conservative Muslim Forum helped to support the Conservative candidate Robert Jenrick, by canvassing in person and by telephone.

Although she was standing for a local council seat herself, CMF Executive memeber Ajantha Tennakoon was one of those who gave time to canvass in Newark in person, joining a Road Trip 2015  battle bus organised by Syed Kamall MEP. The group photo below shows the team together. 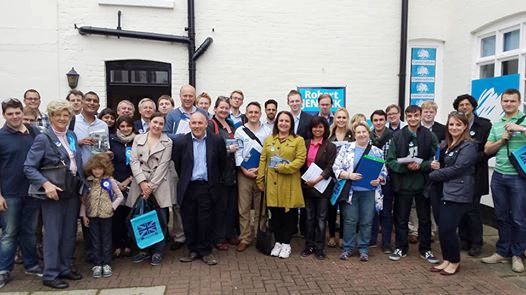 Syed Kamall MEP is standing on the left of the picture in a shirt behind the young girl. Ajantha Tennakoon is on the front row between the woman in a yellow coat (Marina Yannakoudakis, MEP for London 2009-2014)  and the woman in a white and blue coat holding a clipboard.

The hard work was rewarded when Robert Jenrick was elected. As David Cameron said, this was the first time a sitting Conservative government had won a by-election in 25 years!