CMF at the Muslim News Awards

CMF at the Muslim News Awards

The Muslim News Awards are organised each year by Mr Ahmed Versi, editor and publisher of the Muslim News. The Twelfth Awards held on 31 March 2014 were particularly prestigious as they marked the 25’th anniversary of The Muslim News. There was a glittering array of guests, headed by the Prime Minister David Cameron MP; the Rt Hon Dominic Grieve MP, Attorney General and General Sir Nicholas Houghton GCB CBE ADC, Chief of the Defence Staff of the British Armed Forces.

The Prime Minister recognised the “huge contribution Muslims make to Britain” in his speech, and also promised “let me make absolutely clear that, while I’m Prime Minister of this country, Halal is safe in Britain.” His speech can be read in full at this link.

CMF Chairman Lord Sheikh was a top table guest, seated with the VIP guests mentioned above. CMF Deputy Chairman Mohammed Amin also attended as his nominee, Dr Matthew LN Wilkinson, was shortlisted for the Sankore University Award for Excellence in Education which was won by Tuheedul Islam Girls’ High School.

The CMF promotes recruitment into the Armed Forces. General Sir Nicholas Houghton appreciated this support. In the photo below are, from left to right: 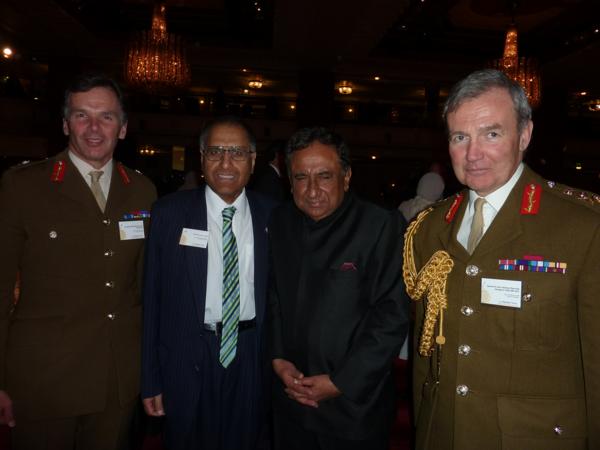