This year the Conservative Muslim Forum organised both a stand at the Party Conference in Birmingham and a fringe meeting with the title “Winning Muslim Votes.” With the May 2015 General Election forecast to be very close, every vote will matter, and there are a significant number of Parliamentary constituencies where Muslims exceed 10% of the total electorate.

The fringe meeting was practically focused, with all four speakers being MPs or Prospective MPs who are out campaigning regularly to appeal to voters from all parts of the electorate. We had four speakers, listed alphabetically:

The event was chaired by Mohammed Amin, CMF Chairman with several members of the CMF helping to usher meeting attendees, take pictures etc. The room was full, which is a great achievement at 1930 on a Tuesday evening at the Conference with many competing events running in parallel. Many MPs and candidates, and their campaign teams, came to hear the practical insights of the speakers.

The pressure of competing events was such that the meeting chairman agreed that the speakers could alternate in leaving the room for short periods to visit a nearby reception, and this was achieved smoothly without interrupting the flow of the meeting. There were a number of questions from the floor.

The photograph below was taken while Afzal Amin was out of the room! It shows Resham Kotecha speaking, with Mary Macleod next to her, and then Hannah David to Mary Macleod’s left. The meeting chairman, Mohammed Amin, is on Resham’s right seated away from the table mostly obscured by an attendee! 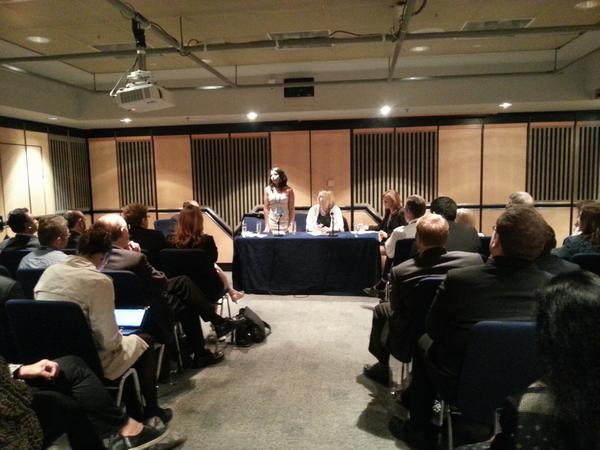