This stand requires a significant commitment by the CMF, both in the cost of the stand and even more so in the time of the volunteers who keep the stand manned and ready to deal with visitors. However it is very worthwhile as it allows the CMF to share its knowledge and expertise with the many visitors who come to the stand.

The picture below has Mary Macleod, MP for Brentford and Isleworth, with Ash Zaman, CMF Deputy Chairman, and Mrs Tahara Amin. The red box of chocolates significantly adds to the pulling power of the CMF stand and has been a tradition every year! Below it is the poster for our fringe meeting; this was the first time that the CMF has had both a stand and a fringe meeting. 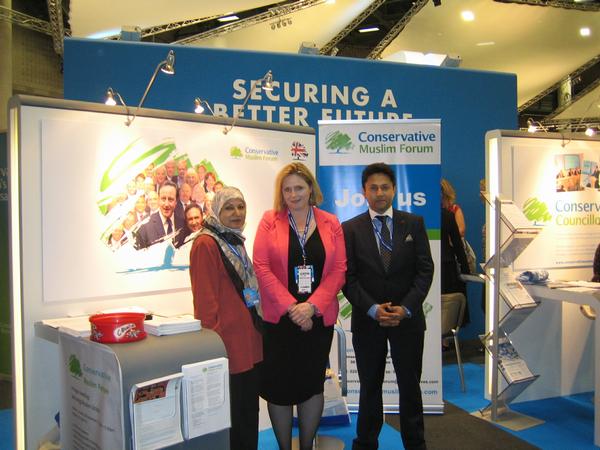 During the four days we had a number of senior government ministers visit the stand, as well as MPs and candidates who were keen to learn how we could help them win re-election or election (as appropriate) in the May 2015 General Election.

We would like to thank the many individuals who generously gave their time to help on the stand, including (in alphabetical order):

Special thanks are due to Shaheen Mahmood, the CMF’s Executive Secretary, who made all the arrangements for the stand but was not able to attend as she was performing the Pilgrimage to Mecca, the Hajj.