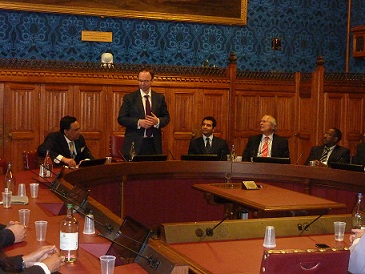 CMF Youth hosted Gavin Barwell, MP for Croydon Central, in the House of Lords for a discussion on “The Conservative Party’s plans to promote community cohesion and integration”. The event was chaired by CMF Youth Chairman Raza Anjum who in his opening remarks highlighted the need for all ethnic minorities to integrate into British society and to embrace British values.

Lord Sheikh, Chairman of the CMF spoke about how Britain was a land of opportunity and spoke highly about British values.

In his speech, Gavin Barwell MP set out how the demographics of his constituency have changed over the years and how Britain is a rich, vibrant and diverse country. He spoke at length about the various factors relating to community cohesion and also highlighted the important role that education and representation can play in the process of integration.

The event was well attended and included a lively question and answer session.