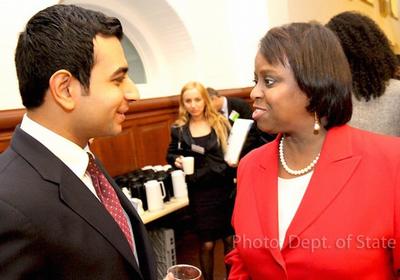 Raza Anjum, Chairman of the CMF Youth Wing, was one of two United Kingdom representatives at the Transatlantic Inclusion Leaders Conference in Copenhagen, Denmark. The three day conference held on 22-24 April 2012 was sponsored by the U.S. State Department and brought together more than 70 young elected political and civil society minority leaders representing 26 countries across Europe and the United States. It marked an important milestone for strengthening relations between emerging minority leaders on both sides of the Atlantic.

Pictured are Raza Anjum with Rita Jo Lewis, the Special Representative for Global Intergovernmental Affairs at the U.S. Department of State.