On 25 and 26 January 2014 the Conservative Policy Forum held its annual Winter Conference in Leeds. Members of the Conservative Muslim Forum were very much in evidence, with Mohammed Amin, Faruk Miah, Raja Najabat Hussain and Dr Ghulam Abbas attending.

Attending such events and asking questions from the floor is an excellent way of raising your individual visibility as well as the collective visibility of the Conservative Muslim Forum. It demonstrates that our members have views on a wide range of political issues, not just issues that obviously touch on Islam.

Attending such events is also an excellent opportunity to meet senior politicians.

Pictured below are Sajid Javid MP and Faruk Miah. Sajid Javid’s story demonstrates how Muslims are progressing in all walks of life. Born in Rochdale as the son of a bus driver, he became the youngest Vice-President in the history of Chase Manhattan Bank before a glittering career with Deutsche Bank. The Conservative Party chose him to fight the safe seat of Bromsgrove, a seat with a 10,000 Conservative majority in 2005. He has had a series of promotions since the Government came to power, and is currently Financial Secretary to the Treasury; the Treasury’s website lists him third in the Treasury hierarchy. 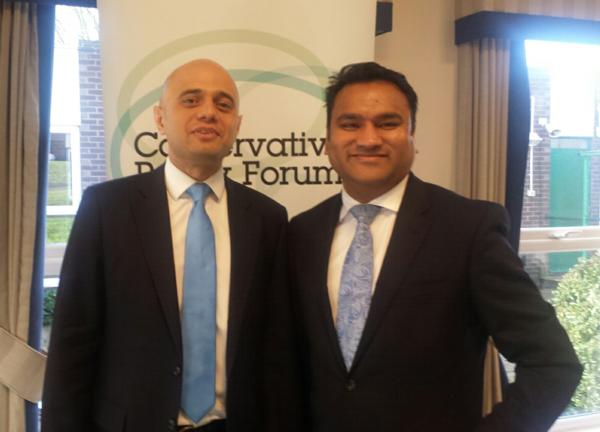