Eid al-Adha is the Muslim festival that falls at the end of the Hajj, the pilgrimage to Mecca. It commemorates the willingness of the prophet Abraham (peace be upon him) to sacrifice his son upon God’s instruction, a story found in the Bible as well as the Quran. The Wikipedia article at this link gives more information about Eid al-Adha.

Although this year Eid al-Adha fell on 12 September, we delayed holding our reception due to the impact of the Parliamentary and Party Conferences calendar. It took place on Tuesday 25 October at 7 Millbank, Westminster, London, SW1P 3JA, and was enjoyed by the many guests from all religious backgrounds and none who attended.

The evening began with Sheikh Bilal Khan reciting from the Quran, verses 37:102-109.

After his excellent Arabic recitation, in accordance with normal CMF practice he provided an English translation. In honour of Muhammad Abdel Haleem, King Fahd Professor of Islamic Studies at SOAS, University of London who was in the audience as one of the Chairman’s guests, the translation was taken from his work “The Quran: a new translation” published by Oxford University Press:

When the boy was old enough to work with his father, Abraham said, ‘My son, I have seen myself sacrificing you in a dream. What do you think?’ He said, ‘Father, do as you are commanded and, God willing, you will find me steadfast.’

When they had both submitted to God, and he had laid his son down on the side of his face, We called out to him, ‘Abraham, you have fulfilled the dream.’ This is how We reward those who do good – it was a test to prove [their true characters] – We ransomed his son with a momentous sacrifice, and We let him be praised by succeeding generations: ‘Peace be upon Abraham!’

Alberto Costa, MP for South Leicestershire was our Parliamentary host for the evening.

Alberto was effusive in praising the good work of the Conservative Muslim Forum.

Like Alberto Costa, Ranil wa elected to Parliament for the first time in the 2015 general election. He emphasised how the Conservative Party is the party for everyone, regardless of religious or ethnic background.

Dr Ranger spoke very movingly about what people of different religions have in common. During the vote of thanks the Chairman Mohammed Amin mentioned that Dr Ranger’s remarkable life story of achieving great success from a humble start i life had been featured in a recent BBC1 programme “Going Back, Giving Back.”

CMF President Baron Sheikh, of Cornhill in the City of London.

Lord Sheikh spoke with great passion about what all of us have in common.

She spoke about “What being a Muslim means to me.” Some in the audience were in tears when she described the adoption in Pakistan of her second child, and her meeting with the late Abdul Sattar Edhi.

The event was televised by the Pakistani channels GEO and ARY.

Below is a photo of the MC Hashim Bhatti, Lord Sheikh and our new CMF roll up banner: 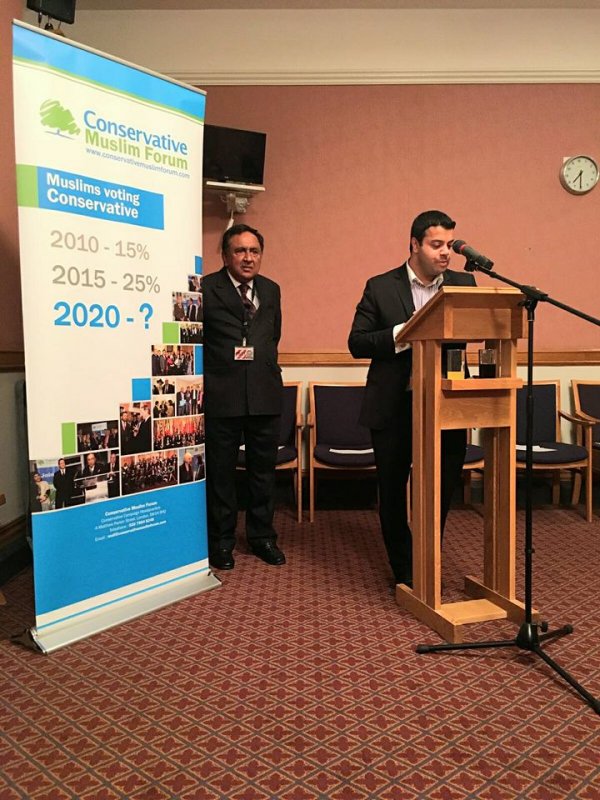