Eid al-Fitr is the Muslim festival that marks the end of the fasting month of Ramadan. The Arabic name “Eid al-Fitr” means “Festival of breaking of the fast.” The Wikipedia article linked gives much more information about Eid al Fitr and how it is celebrated around the world.

On Tuesday 12 July, we held a very well attended reception to celebrate it, at 7 Millbank, Westminster, London, SW1P 3JA. This building is part of the Parliamentary Estate, and opposite Victoria Tower Gardens.

The Master of Ceremonies for the event was CMF Executive member Rabia Bhatti.

The evening commenced with Sheikh Bilal Khan reciting from the Quran, verses 2:185-186.

After a moving Arabic recitation, he provided an English translation. For the benefit of readers, below is the translation of those verses as given in “The Quran: a new translation” by Muhammad Abdel Haleem, King Fahd Professor of Islamic Studies at SOAS, University of London.

“It was in the month of Ramadan that the Quran was revealed as guidance for mankind, clear messages giving guidance and distinguishing between right and wrong.

So any one of you who is present that month should fast, and anyone who is ill or on a journey should make up for the lost days by fasting on other days later.

God wants ease for you, not hardship. He wants you to complete the prescribed period and to glorify Him for having guided you, so that you may be thankful.

[Prophet], if My servants ask you about Me, I am near. I respond to those who call Me, so let them respond to Me, and believe in Me, so that they may be guided.”

Dr Tania Mathias – MP for Twickenham was our Parliamentary host for the evening.

Dr Mathias emphasised how all are equal and welcome in modern Britain, regardless of religious or ethnic background.

Lord Sheikh spoke about the work of the CMF. The prepared text of Lord Sheikh’s speech is available lower down on this page below the group photograph. He also extemporised, and amongst other points congratulated CMF Chairman Mohammed Amin on the award of an MBE in the June Queen’s Birthday Honours List.

Marie van Der Zyl – Vice President of the Board of Deputies of British Jews and Chair of the Board’s Interfaith Committee.

Ms van Der Zyl talked about the common interests of British Muslims and Jews. She illustrated this with the example of the February 2015 petition to preserve the right to halal and kosher slaughter, which was strongly supported by both Muslim and Jewish organisations.

Sir Iqbal Sacranie – Founding Secretary General of the Muslim Council of Britain and currently a Trustee of Muslim Aid, Balham Mosque and a number of other national organisations.

Sir Iqbal emphasised the importance of political engagement, and reminded the audience that from having no Muslim MPs before the 1997 general election, the UK now had 13.

CMF Chairman Mohammed Amin gave the vote of thanks. After the formal proceedings, the guests enjoyed an Asian meal catered by Pride of Asia, with good provision for vegetarians. Below is a group photo of some of the participants, taken after the room had thinned out a bit. 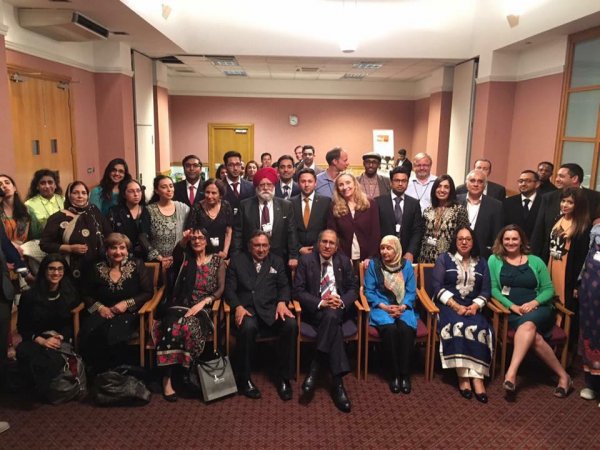 I in fact founded the Conservative Muslim Forum in 2005 and served as Chairman for 10 years. I am now the President but still like to take a role in its affairs.

CMF is a robust body, with membership open to everybody. Indeed, on our Executive Committee we have members from various religious groups including a Christian and a Buddhist.

One of the major objectives of CMF is to build and maintain strong relationships between various communities. In the United Kingdom, we are fortunate to have a very diverse society, where communities and religions of all shapes and colours are respected.

In this regard I would like to state that it is written in the Holy Qur’an that Allah sybhana wa ta’ala said that, “we have created you from male and female and made you peoples and tribes that you may know one another”. We must therefore maintain friendships with all communities.

Islam is a religion of peace; we must make every effort to explain to other communities the true message of Islam. Sometimes problems do arise because of a misunderstanding of Islamic principles and so we must explain the true principles in a gentle and polite manner.

We must be clear that Islam forbids murder and suicide and it is written in the Holy Qur’an that “whoever kills a person… it is as though he has killed all mankind”.

We totally condemn the recent bombings in Mecca, Baghdad and Bangladesh. Unfortunately, Islam is being hijacked by a tiny minority of people who wish to promote twisted interpretations of Islamic values and principles.

Sheikh Bilal just read verses stating that the Holy Qur’an was revealed during the month of Ramadan.

There are over 1.5 billion Muslims in the world, belonging to several different sects. All Muslims follow five basic Pillars of Islam, one of which is fasting during the month of Ramadan.

Muslims fast during daylight hours and in the UK it has been difficult to fast as the days are long and sometimes hot. Fasting is however good for the mind and the body, as it establishes a discipline in one’s life.

At the end of Ramadan, we celebrate Eid al-Adha, which is a joyous occasion. On the day of Eid, people visit Mosques, hug each other, exchange gifts, give money to children and meet friends and relatives.

Although Eid was last week, I would like to wish you all “Eid Mubarak”.

Ladies and gentlemen, the political situation in the UK has changed dramatically over the last few weeks. The British people have decided to leave the European Union and will shortly have a new Prime Minister.

I have a lot of respect for Theresa May and feel she will make an excellent Prime Minister; I look forward to her leading us out of the current turmoil and uncertainty.

We must respect that David Cameron has decided to resign and I consider him to be a man of honour. I would like to pay tribute to his premiership as I feel he has been a highly effective Prime Minister.

When the Conservative Party was elected in 2010, this country was experiencing economic hardship. Over the past six years, David Cameron has led a Government that has halved the deficit, created over two million new jobs and over one million apprenticeships. We are now more stable and more prosperous.

As a businessman, I am also now keen that our standing in the world is not affected by our decision to leave the EU.

We need to establish our trade links with Europe on the best possible terms and also go forward in undertaking more business with the rest of the world.