On 16 October Raza Anjum, Chair of CMF Youth, hosted The Rt Reverend Irfan Jamil, the Anglican Bishop of Lahore, at his home during the Bishop’s recent visit to the UK.

They discussed the human rights challenges facing the Pakistani Christian community. In recent years there have been several high-profile cases of violent attacks against that community including an attack this year on Easter Sunday in Lahore in which more than 75 civilians were killed.

Raza strongly condemned the harassment and discrimination suffered by Pakistan’s Christians and emphasised the need for the Pakistani government to safeguard their rights. He also expressed serious concern at the continued detention of Asia Bibi, a Pakistani Christian mother of five who has been imprisoned under the country’s controversial blasphemy laws and called for her release.

Our Foreign and Commonwealth Office have estimated that around 2.8 million Christians live in Pakistan including two million in Lahore.

Raza is a long-standing campaigner for the rights of the Pakistani Christian community and has worked with the British High Commission in Islamabad and with the EU on this issue.

The Bishop and Raza are pictured below. 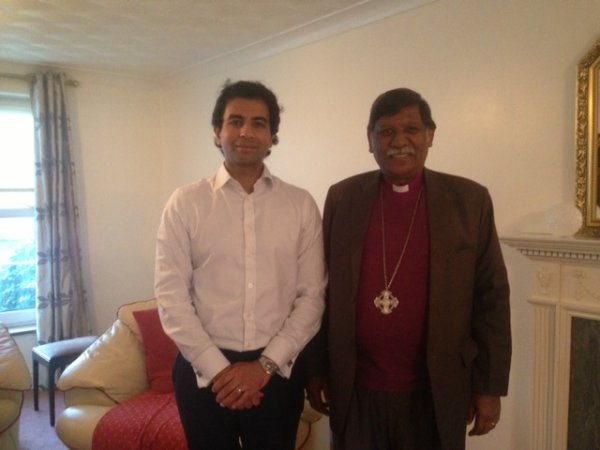