Lord Sheikh hosts OneVoice in the House of Lords

Lord Sheikh hosts OneVoice in the House of Lords

The recent conflict in Gaza has reminded all of us how essential it is to achieve a lasting peace between Israel and Palestine. The question facing ordinary citizens in Israel, Palestine and Britain is what can we do to help achieve peace?

OneVoice is a grassroots, civil society organisation that empowers Israelis and Palestinians to pressure their elected representatives towards a two state solution. The movement operates in both Israel and Palestine, and mobilises the moderate majority to demand accountability, an end to the occupation, and a two-state solution from their leaders.

On 20 October 2014 Lord Sheikh hosted an an event in the House of Lords for OneVoice, which was also supported by the Conservative Muslim Forum. It had an outstanding array of speakers and CMF Secretary Faruk Miah acted as the Master of Ceremonies.

Lord Sheikh began by introducing the event, covering his long-standing support for OneVoice, and the work he has done both here and in the Middle East to assist the cause of peace. Lord Sheikh made a very powerful opening speech which is reproduced below after the list of speakers and before the photographs.

John Lyndon who is the Executive Director of OneVoice Europe gave an overview of the organisation and its work. John’s background is that he was awarded a B.A. in History and English Literature from University College Dublin, and a Master’s Degree in International Relations from the University of Sheffield, with his studies focusing on the Middle East.

Tal Harris  who  was the Executive Director of OneVoice Israel for four years shared a perspective from Israel. Tal joined the organisation in 2007, quickly taking a leading role that saw the establishment of OneVoice’s Tel Aviv University chapter. He became a full time staff member in 2009, organising 30 town hall meetings across Israel. He was promoted to head the movement in Israel a year later, where his many accomplishments include expanding the Youth Leadership Program in partnership with the National Union of Israeli Students. Further to his work with OneVoice, Tal has been leading several nation-wide media campaigns, and co-conceiving of the first-ever Caucus for the Two-State Solution in the Knesset (now the Caucus for Ending the Israeli-Arab Conflict) which engages 43 Members of Knesset of several factions. Tal has recently been elected to be a member of the Steering Committee for the Israeli Peace NGOs. Tal was born in Kibbutz Negba and raised in Raanana, and holds a Master’s in Diplomacy from Tel Aviv University and a Bachelor’s in Philosophy and Politics from the Open University.

Ezzeldeen Masri who is the Executive Director of OneVoice Gaza explained why he supports OneVoice. Born in Gaza City in 1971, Ezzeldeen has experienced three major military confrontations since Israel pulled out of Gaza in 2005, yet he continues to lead the only organisation that supports a two-state solution in the territory. Ezzeldeen completed his Bachelor’s in Political Science and Criminology in the spring of 1997 from Northeastern Illinois University. In the fall of 2000, he completed his Master’s in International Relations, with specialization in conflict resolution. In November 2006, he opened OneVoice Palestine-Gaza office and was appointed as the Executive Director. Recently Ezzeldeen was profiled in the New York Times, at this link, which illustrated the challenging work he undertakes as one of Gaza’s few public and unapologetic advocates for two-states.

We also had some extra speakers whom Lord Sheikh had invited to attend and who shared their thoughts on the conflict.

After the speakers, Lord Sheikh chaired a question and answer session before CMF Chairman Mohammed Amin gave a vote of thanks.

Lord Sheikh’s opening remarks are reproduced below with his permission.

I would like to welcome you all to this meeting in the majestic surrounding of the House of Lords.

When I was asked to host this event by OneVoice I said that I will be pleased to do so. I first heard of OneVoice at a meeting organised by Baroness Hayman who was at that time speaker of House of Lords. Subsequently Jake Hayman came to see me and provided me with further details of the movement.

About 18 months ago there was a debate in the House of Lords on civil society in Palestine and I referred to the work undertaken by One Voice. I also referred to OneVoice during a recent speech I made at an International Conference in Tunisia.

OneVoice is an international grassroots organisation with offices in Tel Aviv, Gaza and Ramallah. It also has presence in London and New York. OneVoice gets people involved in conflict resolution and empower them to make representation to the political leaders. It is firmly of the opinion that the Israeli and Palestinians can achieve peace if they believe in it and play a role in its achievement.

Their objective is to achieve a two state solution and to undertake this peacefully by linking the civil society with the politicians and community leaders.

You will of course hear more of the activities and the objectives of OneVoice from the speakers who will follow me.

I would first like to talk about Gaza where there now has been a ceasefire. I appreciate that Hamas did launch rockets into Israel but the response of Israel has been totally disproportionate.

Israel has inflicted collective punishment on the people of Gaza and destroyed or damaged the infrastructure, homes, factories, power station and other buildings. There were nearly 2,200 people in Gaza were killed including over 500 children. Over 12,000 people in Gaza were injured and thousands people have been made homeless.

I am taking a group of Doctors to Gaza in about two weeks’ time and I will then see for myself the misery and destruction which has been caused by the Israelis. I will prepare a report which will be submitted to the relevant interested organisations and individuals.

After the previous Israeli invasion in 2012 I did visit Gaza and assisted in taking four conveys of humanitarian aid.

I also visited Israel and West Bank and in this regard I wanted to talk to the Israeli officials and the Arabs in order that I can see the problems from both sides. I spent nearly a day with the Israelis officials. I visited Jerusalem, Ramallah, Nablus and Bethlehem and met a number of people.

I also visited an Arab village and a settlement which was occupied by the Israelis. When I saw the settlement I did notice the Israelis control the use of the land and water resources.

There are frequent check points and road blocks which makes life very difficult for the Palestinians.

Israel has just taken over nearly 1,000 acres of land around the settlements of Etzion near Bethlehem. I feel that it is a very bad and ill-judged decision as we are all trying to find a peaceful solution.  We would strongly urge the Israelis not to proceed with the development of this area. I think that we all agree that building of settlements have been illegal and should not have taken place.

My findings were that the attitude of the settlers towards the Arabs was arrogant to say the least but they are belligerent and cause harassment and intimidate the Arabs.

During my visit I saw Arabs protesting near the wall which the Israeli have created and the Israeli were throwing a liquid at them which smelled of human waste. This is an example of total humiliation and contempt shown by the Israelis.

We went to a court where young Arab boys were being prosecuted for alleged throwing of stones. I saw boys aged 9 to 12 years brought to court in chains and the proceedings were undertaken in Hebrew.

In regard to settlements in different parts I saw that these were linked by roads which were only used by the settlers and no Arabs were allowed to use them.

Ladies and Gentlemen I have described is what I have witnessed and are my own findings. These are not hearsay and are totally factual.

I am very glad that last week the House of Commons held a debate on whether or not United Kingdom should recognise the statehood of Palestine. I was very pleased that Members of House of Commons voted by 274 votes against 12 votes to agrees and endorse the motion.

The British Government must take heed of what was decided in House of Commons and hope that our government will now recognise Palestine as a state as soon as possible.

Sweden has recently agreed to recognise Palestine as a State.

135 out of 193 UN members have recognised Palestine. If there is recognition by United Kingdom there is a very good chance that other European countries will do the same.

The conflict in Palestine is the root cause of dissatisfaction and frustration in the Middle East and in fact in the whole world.

The European Union including United Kingdom did agree some years ago that Palestinians do have a right to self-determination but this has not been achieved.

We do appreciate the formation of a new technocratic government for the Occupied Palestinian Territories and it must show that it abides by the quartet principles.

The West Bank and Gaza must be united under one government and be committed to peace. All the Arabs must unite and speak with one voice. Conflict between the Arabs will not achieve peace.

It is of course imperative that the Prime Minister and the government of Israel must show a commitment to enter into a serious dialogue and be much more conciliatory.

It must avoid all actions to aggravate the situation.

To achieve peace Hamas must accept the quartet principles and join the efforts for peace.

The Palestinian authority must show leadership and commitment to a dialogue with Israel and make progress on governess and security for Palestinians in Gaza as well as West Bank.

Israeli people have the right to live in peace and security and it is essential that all the Arabs and Muslim states do recognise the state of Israel which was set out in Saudi Arabia’s 2002 Arab peace initiative.

Hamas and all the Palestinians must recognise Israel.

There must be creation of two states based on 1967 lines and there needs to be land swaps.

Israel must give up terrorises in pursuit of peace.

All restrictions of Gaza and West Bank will of course be removed and their security and the security of Israel should be guaranteed.

There a few issues which would need negotiations and these are as follows.

In arriving at a settlement, United States should play the role of an honest broker and have an even handed approach for the settlement of peace. Double standards will not work and will create further disharmony.

In an effort to approach a peace settlement I think Arab countries such as Saudi Arabia and Egypt can play a positive role.

Turkey is a very much an upcoming power and its involvement would be desirable.

The quartet and our own country also have an important role to play.
I feel that we have a moral responsibility as we had a mandate in Palestine.

We were a party to signing the Sykes Picot agreement.

We were also responsible for the issue of Balfour declaration.

Finally I would like to say that I hope we can achieve peace in the Holy land during my lifetime.

In the picture below, from the left are: 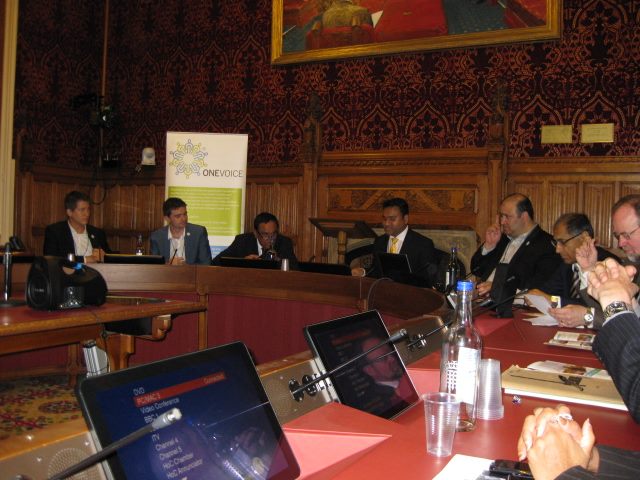 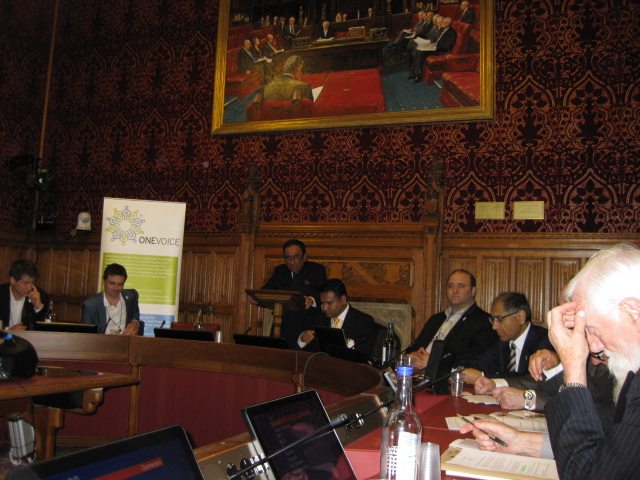