Meeting on Pakistan in Saffron Walden

Meeting on Pakistan in Saffron Walden 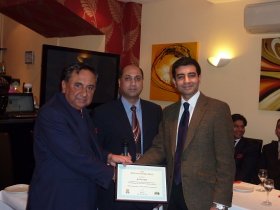 Cllr Raza Anjum, head of CMF Youth, and Sarfraz Anjum organised a meeting in Saffron Walden to discuss the current situation in Pakistan. Raza has recently travelled to Pakistan to speak against the conviction of Asia Bibi who was sentenced to death for blasphemy.

Raza Anjum in his speech referred to his efforts in Pakistan to obtain the release of Asia Bibi. He had worked in conjunction with Salman Taseer who unfortunately was murdered for standing up against the blasphemy law.

Lord Sheikh also spoke at the event and mentioned that it is important that democracy should be maintained in Pakistan but it is necessary for the judiciary and the media to remain independent and furthermore the insitutions needs to be strengthened. He also commented that he believes in the empowerment of women and that women need to be educated and given every opportunity to succeed.

After the meeting Lord Sheikh presented Raza Anjum with the Pride of Cambridge Award in recognition of the excellent work undertaken by him in the UK and also in Pakistan.