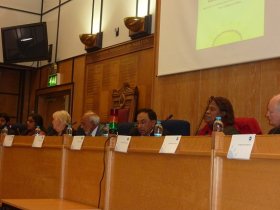 There were a number of speakers at the event which included leaders of the Sikh, Christian, Jewish and Hindu communities. Lord Sheikh in his speech talked about the similarities between Islam and other religions and stated that there are more similarities between people than differences. He referred to the fact that in the United Kingdom, there are people of different religions and we must not only accept but respect people of different faiths.

There was also a Question & Answer session after the initial speeches where the members of the audience were able to interact with the speakers.