Our fourth and fifth objectives are:

Accordingly when we were asked to send a speaker to Rayne’s Park High School in London for their Religious Education Day on 18 October 2013, Executive Member Cllr Asif Ayub readily volunteered. The subject was “Peace and Conflict” and he was expressly asked to discuss Islamic attitudes to war but also to include the ideas of forgiveness, reconciliation and how Islam contributes to the promotion of world peace. He shared the session with another speaker, Rev Peter Taylor who presented the Christian perspective on the same themes.

Reflecting on his experience of giving the talk, Asif recalled one Muslim student approached him during a break and saying:

“Oh my God you don’t know how much you have helped me. You have lifted months of torment from my mind because of my school friends coming to me and showing me a quote from the Quran which they interpreted as saying that non-Muslims will all go to Hell and asking me if that’s what I believe? Listening to you, now, I can go and tell him that this is not the case, and this makes me feel so good, you have no idea”.

Asif commented that as a Muslim he was aware that that the boy did not want to believe that either.

Below Asif Ayub is pictured with Philip Wheatley, the school’s headteacher. 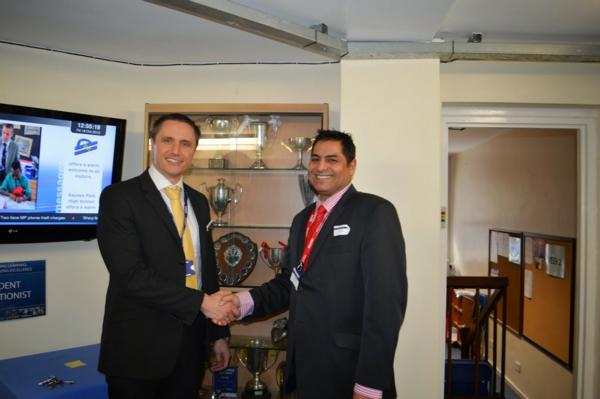