The British Library recently had a major exhibition “Mughal India: Art, Culture and Empire” which is now closed.

At its peak, the Mughal Empire stretched from Kabul in the northwest and covered most of the South Asian subcontinent. Descendants of Timur (Tamerlane), the Mughal emperors ruled over the land from the 16th century through to the late 17th century and are credited with producing some of the most beautiful artefacts and architecture in India. During this period, the rulers encouraged artistry, reformed government and accelerated the development of Indian transport and communications.

Lord Sheikh organised a private viewing of the Exhibition on 21 March 2013 which was free to CMF Members and Supporters and their guests. The group had the further benefit of a speaker from the British Library and a curator. Before the viewing, Lord Sheikh also gave a brief speech relating to the Mughal Empire and the Emperors. He talked about the dynasty which was founded by Babur in 1526 and ended when the last Mughal Emperor Bahadar Shah Zafir was deposed by the British in 1857 and exiled to Burma in 1858. 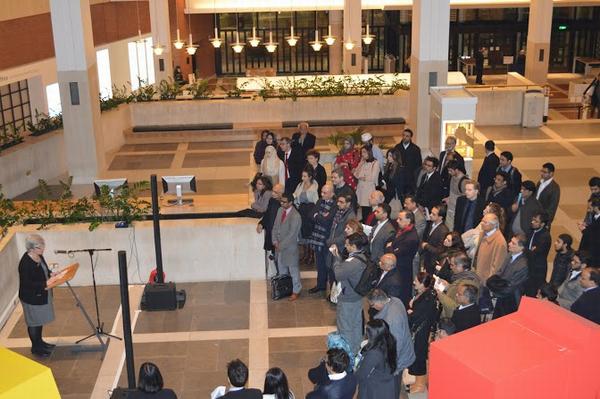