The world was rightly shocked by the terrible bombings in Brussels on 22 March 2016 and a few days later in Lahore on 27 March 2016.

By happenstance both of them ended up signing at the same time, as captured in the photograph below. 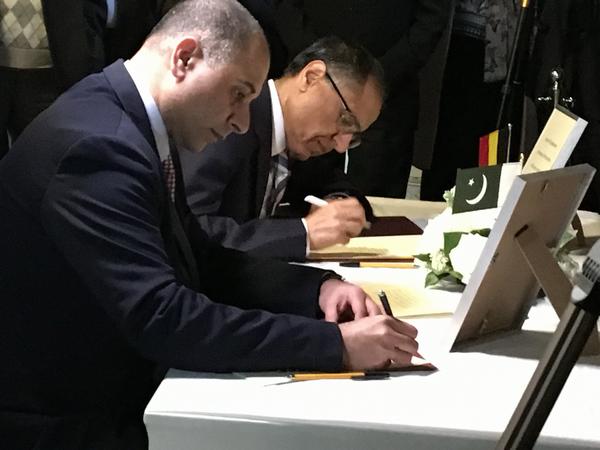 Mohammed Amin’s messages were composed spontaneously, but he had the opportunity to photograph them so the text is reproduced below.

Brussels is a city that I have stayed in on several occasions and which I love. I was horrified by the bombings which brought to your city the same death and destruction that London has experienced before.

The criminals who carried out these murders were co-religionists of mine, other Muslims. The reality is that their understanding of Islam is utterly perverted. They believed that they were carrying out God’s work. I personally have no doubt that God will condemn them on the Day of Judgment.

My heart goes out to the people of Lahore who have been injured or lost loved ones as a result of this heinous crime.

The terrorists claim to be carrying out God’s will. The reality is that their views are an abomination and I firmly believe that on the Day of Judgment they will answer for their crimes.