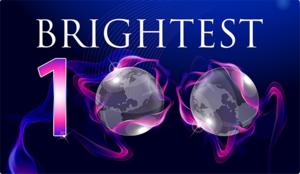 On Thursday 6 November 2013, an awards ceremony was held to recognise the Brightest 100 British Bangladeshi’s in the UK in the magnificent Jubilee Room of the House of Commons. The publication of the ‘Brightest 100’ is the brainchild of Wazid Hassan Shelim of Pride of Asia. He is himself a successful businessman from the Bangladeshi community who has helped the Conservative Muslim Forum by catering our Eid party for several years.  The goal is to highlight the achievements of the most talented young people from the community and create a professional network of the brightest British Bangladeshi achievers.

The ‘Brightest 100’ included participants from a wide range of professions from across the UK.

Lord Sheikh, Chairman of the CMF made an inspirational speech at the event about his own personal experience of having come to the UK with nothing and through hard work and determination, made his fortune in business. The first Conservative Muslim peer, Lord Sheikh’s speech included the words “the UK is a land of opportunity, and you can be anything you want to be so long as you are willing to work hard to realise your dreams”.

Amongst those honoured in the ‘Brightest 100’ were three members of the CMF Executive:

Faruk said “I am humbled to be chosen amongst the Brightest 100 and congratulate Shelim on a fantastic initiative.  It was amazing to meet so many people from all across the country whose common denominator was hard work and determination to succeed. I am very excited about getting some of the Brightest 100 involved in the empowerment and engagement projects that I am planning for the Conservative Muslim Forum in 2014 as part of my role as CMF Chair of Education”

Hasina said ”I am very honoured and privileged to be included in the publication.  It is particularly humbling to be counted amongst such amazing contemporaries.  British Bangladeshis are excelling in and contributing to every sphere of activity – from politics, to business, to finance to the arts and culture.  They are making their mark and this publication is only the beginning. I hope that in years to come, the publication will be able to number British Bangladeshis in their thousands if not millions.  To do that, it is important that we support each other, nurture young talent and bring our achievements to the attention of both our own community and the wider society so that we can help to inspire others.”

Attic said “the Brightest 100 event showcased only a small proportion of British Bangladeshi talent. I am honoured to have made it into the publication as one among many up and down the country whose professional and political achievements, dedication and hard work demonstrate that our [British Bangladeshi] achievements extend far beyond the restaurant business which we have proudly dominated for decades.”