The 24 April 2013 collapse of a garment factory in Savar in the Greater Dhaka region in Bangladesh horrified the world, with a death toll of over 1,000.

Several members of the CMF Executive and their friends were deeply touched by the disaster, and decided to visit Bangladesh at their own expense to provide relief to the survivors and to the families of the deceased. They launched a fundraising appeal which is copied below:

YOUR FRIENDS OF SAVAR

“Friends of Savar” is a response to the tragic events which unfolded in Savar, Bangladesh, the effects of which have affected the lives of thousands and will continue to do so for decades to come and has touched the hearts of thousands around the world. “Friends of Savar” are a group of volunteers, who like you, felt the need to let the people of Savar know that they were not alone in the misfortune that has befallen them; we are with them and will continue to be with them.

We have come together with the common intention of providing immediate and long term care for the survivors and their families and represent a movement in the name of humanity.

The response has been overwhelming and heartening with the support and affection everyone has shown towards the victims of Savar with many of you spreading the word over the last weeks to try and raise as much funds as possible simply to make the lives of those affected a little better.

Donations and support have been pledged from members of all communities and different backgrounds including a sitting Lord, making a large personal financial contribution to the cause. Not only have you raised funds and continue to do so, but amongst all our supporters many have volunteered to travel to Bangladesh including Monir Ali, Attic Rahman, Muhibur Rahman, Cllr Asif Ayub, Ali Ahmed, Hasina Momtaz, Najma Begum, Fiona Barry, Faruk Miah, Abdus Salam and Ash Zaman who have all made large personal financial contributions to this cause.

The volunteers (above) are travelling to Bangladesh between 18 -25 May 2013 having pledged to work hard to ensure every penny of your donations are put to the best possible use and have maximum impact. All of our volunteers are professional people who have set aside time from work and their families for this cause.

They will be using their own funds for travel, food and accommodation in Bangladesh. Therefore 100% of your donations will go towards this relief effort.

We would like to give a massive thank you to all who have come forward in support of this cause in Savar, thousands of miles away, at the call of humanity.

On behalf of the Friends of Savar Team

The team went to Bangladesh in May as planned. In the picture below they inspect the scene of the disaster and talk with eyewitnesses. 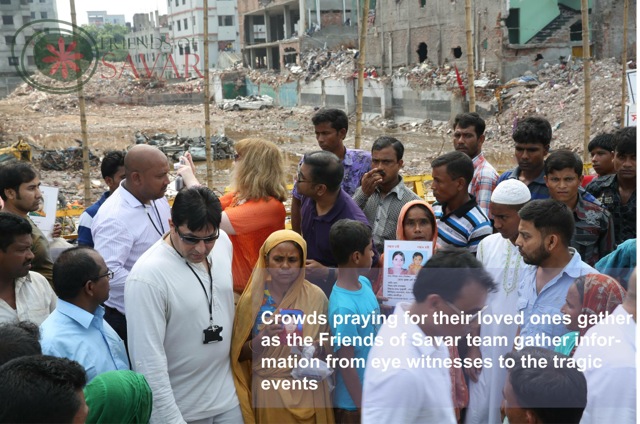 Asif Ayub, Abdus Salam and Attic Rahman visiting one of the injured in hospital. 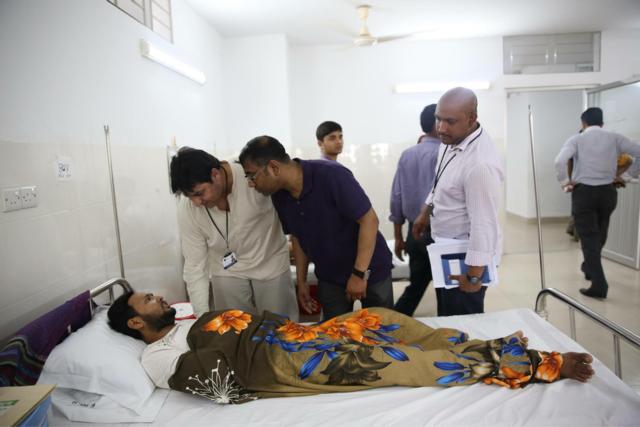