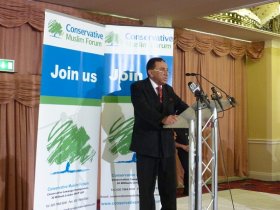 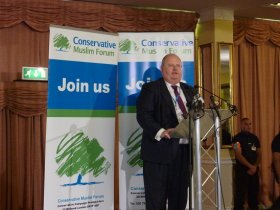 In his speech Eric Pickles talked about the Conservative Party being an inclusive Party and also talked about the role that the Muslim community has played in the advancement and wellbeing of the country. He further said that the United Kingdom is a cohesive society and it is important that all the communities live in harmony.

Lord Sheikh initially talked about his connection with Manchester, followed by the economic situation of the country, the need to take remedial action, NHS reforms, Conservative policy on education and international aid. He also mentioned that the Conservative Muslim Forum was a robust organisation with a large membership. It is an active organisation with distinct objectives.

He also thanked the Conservative Muslim Forum North West branch for organising the event which was attended by over 700 persons. Lord Sheikh also gave interviews to the media and the event was widely covered by newspapers and television channels.