On Thursday 19 March 2015 we were looking forward to hearing the Rt. Hon Justine Greening MP talk about the importance of supporting more women to enter mainstream politics, women’s empowerment and her own journey from a successful finance manager at Centrica plc to Secretary of State for International Development.

Every organiser’s nightmare is to have a speaker fall ill just before the event, and unfortunately that happened to Justine Greening who had to leave her office early that day due to being unwell.

Accordingly we were delighted when Andrea Leadsom, MP for South Northamptonshire and Economic Secretary to the Treasury was able to step into the breach. As a Treasury Minister she was able to talk about the Budget as well as her experiences as a female candidate and MP.

One of her most striking comments was that South Northamptonshire was the 117’th seat she had applied for. (She had been selected in 2005 to fight the rock solid Labour seat of Knowsley South, which was good experience but completely unwinnable.) Her experience illustrates the level of commitment a career in politics requires.

There was also excellent engagement from the audience during the question and answer session, and Andrea Leadsom now has our undying gratitude!

Andrea Ledsom can be seen speaking in the photograph below. Seated to her right is Rabia Bhatti, a member of the CMF Executive and Chair of CMF Women, who organised and chaired the event. To Ms Ledsom’s left is CMF President Lord Sheikh who was our host, and then CMF Chairman Mohammed Amin who provided a Quran reading in English and acted as Master of Ceremonies, and CMF Secretary Faruk Miah who gave the vote of thanks. 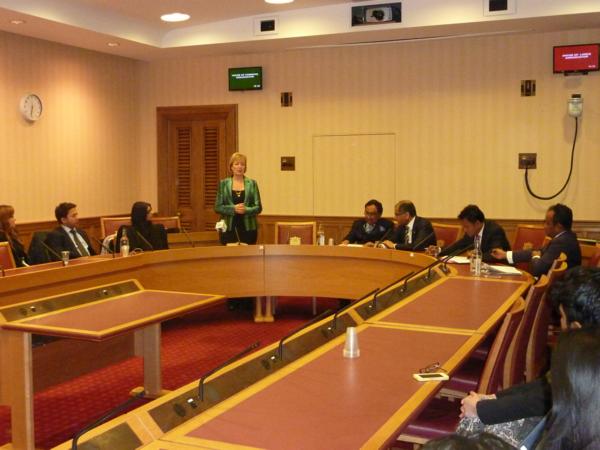