Political Engagement – Be a Local Councillor event in Palmer’s Green

Political Engagement – Be a Local Councillor event in Palmer’s Green

Not being superstitious, we chose Friday 13 February to hold the second running of our event “Political Engagement – Be a Local Councillor.” We were hosted by MCEC – Palmers Green Mosque, Muslim Community & Education Centre who helped us to take our event out into the community. The first running had been at the House of Lords on 18 June 2014.

The event was recorded and the video can be watched lower down on this page.

As with all CMF events, the evening opened with a Quran recitation by Salah Al-Ansari, Visiting Lecturer in Islamic Studies at Heythrop College, University of London. The text was Quran 42:36-38.

Mohammed Amin, CMF Chairman, who also acted as Master of Ceremonies for the evening then read out the English translation and explained that he had chosen the text because of the importance of “consultation” (“shura” in Arabic) in Islam. He went on to say that in a country of the UK’s size with 60 million people it is not feasible to get everyone together for consultation, but that he considered representative democracy to serve the same purpose.

The Muhammad Asad translation of Quran 42:36-38 is given below:

AND [remember that] whatever you are given [now] is but for the [passing] enjoyment of life in this world – whereas that which is with God is far better and more enduring. [It shall be given] to all who attain to faith and in their Sustainer place their trust; and who shun the more heinous sins and abominations; and who, whenever they are moved to anger, readily forgive; and who respond to [the call of] their Sustainer and are constant in prayer; and whose rule [in all matters of common concern] is consultation among themselves; and who spend on others out of what We provide for them as sustenance;

Mr Shappir Alim, who is a trustee of Palmers Green Mosque, Muslim Community & Education Centre, then formally welcomed us on behalf of the hosts.

The next speaker was David Burrowes MP. He is the Member of Parliament for Enfield Southgate, the constituency in which the venue is located. He spoke about how much the Conservative Party, and indeed other political parties, welcome people from all ethnic and religious backgrounds who want to make a difference in their local communities.

Councillor Peter Fleming from Sevenoaks Council (he was the Council Leader 2011-2015) spoke in more detail about the role of a local councillor and the impact one can have.

The final speaker Cllr Halimah Khaled of Broxtowe District Council was perhaps the most moving of all the speakers. After explaining how she was the only Muslim woman on the Council, she gave a special example of the things she had been able to do for her constituents. An elderly constituent was dying of a terminal illness, and his greatest concern was to get a disabled parking badge which his widow would need after his death. Cllr Khaled was able to expedite that. There were few dry eyes as Cllr Khaled told us this story.

Afterwards there was a lively question and answer session. Speaking from the floor, Cllr Abdul Latif from Merton Council told the meeting about how he decided to enter politics for the first time aged 74. At the opposite end of the age range, questions were taken from two young boys who were probably aged about twelve.

While all of the speakers were members of the Conservative Party, their message was not party political. Instead they stressed the way citizens can help their local communities by running for electoral office.

If you don’t want to watch the video from beginning to end, use the information below for the time control.

If you would like us to run this event in your community, please get in touch and we will see what can be arranged.

Below is a photograph of Syed Kamall speaking. Seated to his left is David Burrowes MP and then Cllr Peter Fleming. 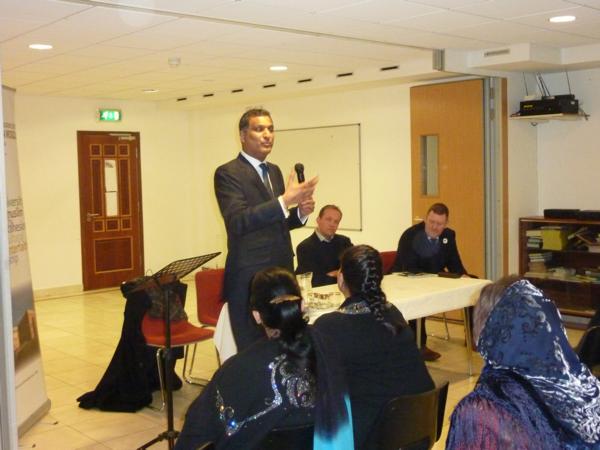 The picture below was taken during the question and answer session. Cllr Fleming needed to leave prior to that due to his travelling arrangements. Mohammed Amin is standing with the microphone. To his right are David Burrowes, Syed Kamall and Cllr Halimah Khaled. The young boy sitting in front of Mohammed Amin was one of those who asked a question. (The CMF believes that political engagement should start young!) His face has been intentionally obscured as he is a minor. 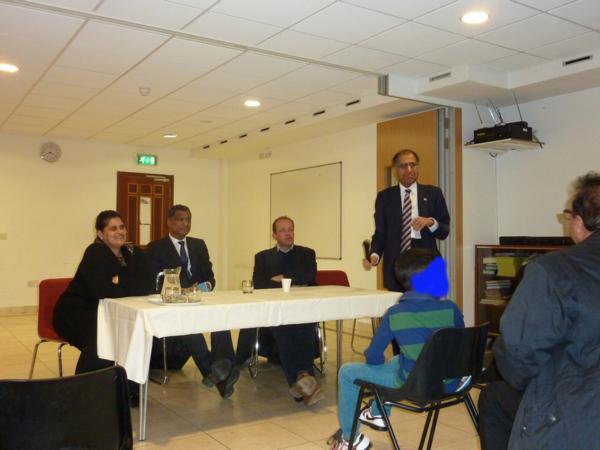