After Lord Sheikh learned that Clare College Cambridge had selected the CMF’s Deputy Chairmain Mohammed Amin as Alumnus of the Year 2014 he invited Mr Amin and his wife  to a celebratory dinner and extended his invitation to the entire Executive of the Conservative Muslim Forum. Lord Sheikh also invited Carl Arrindell, Director of International Operations and Head of News & Current Affairs at the Islam Channel, and his wife Pauke. Mr Arrindell is a mutual friend of Lord Sheikh and Mohammed Amin.

The dinner took place on 5 November 2013 at Layalina Restaurant, Knightsbridge. The  Conservative Muslim Forum Executive had taken a collection and presented Mr Amin with an engraved glass trophy. It can be seen in the group photo below and also in the 13 minute video below as Mr Amin rests his hand on it while speaking. The inscription is reproduced below:

Presented by Members of the Executive Committee of the Conservative Muslim Forum to Mohammed Amin to commemorate the honour bestowed upon him of Alumnus of the Year 2014 by Clare College Cambridge.

After Lord Sheikh had presented Mr Amin with the trophy, he was asked to say a few words. Mr Amin’s speech was recorded by Executive Member Cllr Asif Ayub and can be watched below. Mr Amin has since mentioned that he had not prepared a speech and was speaking impromptu!

Below are some pointers towards the content of the video: 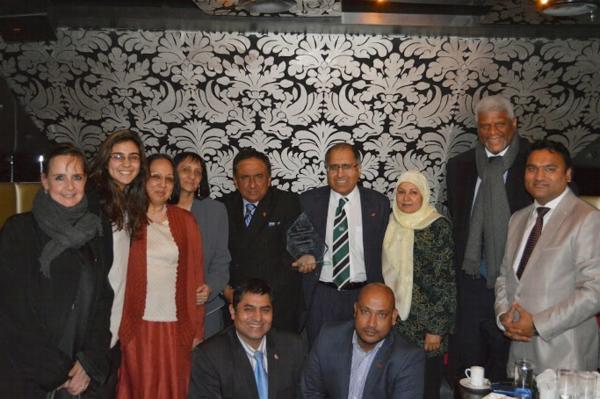