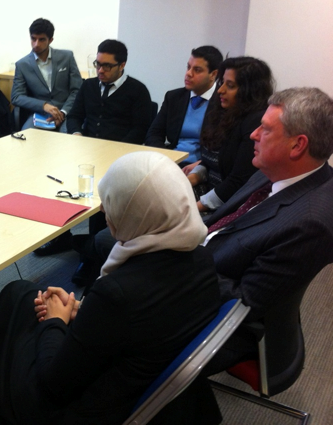 The mentoring session focused on having a clear message which engaged with voters when campaigning. It was also vital to ensure that one had a key voter base to rely on. At the same time, when deciding which political issues to focus on, factors such as whether the issue was generally salient, whether it was personally relevant, whether it was capable of being politically differentiated and finally, whether the issue related to the way people actually behave in the polling stations were all relevant considerations.

Hashim Bhatti is sitting in the centre of the picture with the blue jumper and white collar. Lynton Crosby in on the far right of the picture.

The one hour video of the meeting is embedded below. It provides an excellent record of Lynton Crosby explaining how effective political campaigning is conducted.