On Tuesday 28 March, alongside Conservative Friends of Israel (CFI) we hosted the NGO Merchavim Institute of Israel in Parliament.

Israel’s survival and flourishing over the last 66 years have shown that it is possible to build a vibrant multi-ethnic and multi-religious democracy, despite facing existential external threats and many internal challenges.  However, while Israel’s record is a beacon to other countries, more still needs to be done to fully integrate all of its citizens, and to ensure that all groups, including Israel Arabs and ultra-Orthodox Jews, play their full part in the country’s economy and in its defence.

Since 2006 the Merchavim Institute in Israel has had one clear goal: to establish a shared citizenship for all of Israel’s citizens. The event allowed the audience to learn about what Merchavim is doing, the challenges it faces, and how they can help. Most importantly, for those who have not personally visited Israel the evening was an opportunity to learn about the complexity of Israeli society.

CMF Chairman Mohammed Amin began by welcoming the guests. He mentioned that when discussion of Israel arises, he often asks people what proportion of Israelis are Muslims. Most answers he receives are far below the correct figure, which is 20%. In comparison, only 5% of Britons are Muslims. In Amin’s view, the CMF and CFI should be agreed on making Israel the best possible country for all of its citizens, and that is Merchavim’s goal.

Our Parliamentary host, Paul Scully, MP for Sutton, Cheam and Worcester Park then opened the proceedings by sharing his personal experience of visiting Israel.

Chairing of the meeting was then handed over to Errol Rudnick, Chair of British Friends of Merchavim, a UK charity which helps to fund Merchavim’s work in Israel. The three Merchavim speakers from Israel were illustrative of the diversity of Israeli society:

In particular, the speakers explained some of their projects. For example the Arab Teacher Integration in Jewish Schools Program both provides career opportunities for the Arab teachers and helps Jewish pupils to understand the benefits of Israel’s diversity.

Roi Maor holds a Master’s degree in History from the Tel Aviv University. In the past he has held roles in senior management, resource development and financial management for a number of leading Israeli human rights organizations. Roi holds the dual role of Chief Financial Officer and Deputy Executive Director at Merchavim.

Elisheva made aliyah from Ethiopia to Israel at age five. She was educated and raised in the southern city of Kiryat Gat, and carried out her national service teaching in a primary school. Elisheva has a B.A. in political science and psychology from Bar Ilan University, and participated in the International Visitor Leadership Program of the US State Department on grassroots activism. Elisheva loves to influence the creation of a better society. To this end she has been involved in civil society organisations for more than a decade. In 2003, she coordinated a national coalition of 15 Ethiopian organisations and in 2005, she worked for a German agency for political and educational activism. For the past five years, first at the Israeli Prime Minister’s Office and then at the Joint Distribution Committee (JDC), Elisheva has focused on relations between government and civil society. She is currently working on a project to improve social cohesion in Israeli society.

Abeer Halabi was born and resides with her husband and two adult children in the Druze Arab village of Daliyat al Carmel, Mount Carmel, near the city of Haifa. She holds a Master’s degree in Social Work and has extensive experience leading diverse groups of women and conflict resolution groups. Additionally she is a member of the 2014 cohort of The Mastery Foundation community empowerment course for international leaders. Abeer is a Merchavim group facilitator.

Below from left to right: 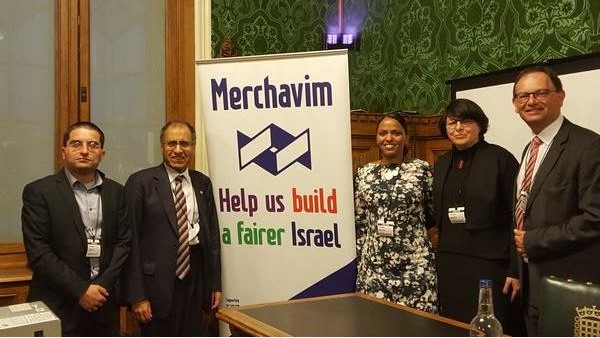