The Contribution of Muslims in The First World War

The Contribution of Muslims in The First World War

On Monday 17 November, the President of the Conservative Muslim Forum Lord Sheikh hosted an event in the House of Lords to remember the contribution that Muslims made in the First World War.

I am pleased to welcome you all to this meeting in the grand surroundings of House of Lords.

The purpose of the meeting is to commemorate the contributions of the Muslims during the First World War and also strengthen the relationship between the Armed Forces and the Muslim Community.

I spoke twice in debates in the House of Lords to commemorate the centenary of First World War.

Today I want to focus on the contributions of Muslims during this war.

The significant part played by the Muslims is not widely acknowledged and the sacrifice they made and the suffering that they endured need to be fully appreciated.

I hope following today’s discussions we can all appreciate their contributions and perhaps address this imbalance.

India raised the world’s largest volunteer armies, a total of 1.5 million during the First World War, and even more in World War II. This was greater than the combined total of all volunteers from Scotland, Wales and Ireland.

There were in fact 400,000 Muslims who were part of the Volunteer Army.

They fought out of love and loyalty to the King Emperor and the Empire.

This marked the first time the Muslim soldiers ever fought on European ground.

They were originally called upon for help when the British Forces were suffering heavy causalities which reinforces just how historically important their role was.

Indian Expeditionary forces, of which there were seven, provided crucial support and fought directly alongside British Forces in Europe for example at the battle of Neuve Chapelle, they provided half of the attacking force.

A British General described them as a magnificent body who performed the most useful and valuable service.

More than 74,000 Indian troops which included Muslims were killed or declared missing in action during World War I, a number that is testament to the level of sacrifice and loyalty shown by the Indians in supporting the Allied Forces.

Participants from the Indian sub-continent were recognised for their bravery and valour in combat during the First World War with over 9,200 decorations, including 12 Victoria Cross medals.

Sepoy Khudadad Khan who was a Muslim was the first native-born Indian to win the Victoria Cross for his gallantry in the face of overwhelming numbers. He served in the 129th Duke of Connaught’s Own Baluchis regiment.

There were two other Muslims who were awarded the Victoria Cross and their names are Mir Dast and Shahamad Khan.

There were many military hospitals set up in UK and perhaps the most famous of which was in the Royal Pavilion in Brighton where Indian soldiers including the Muslims were treated.

A number of Muslims who died as a result of their injuries sustained during the action in the First World War were buried on the Horsell Common in Woking.

We should never forget their contributions. The Union Jack meant a lot to them and a number of them paid the ultimate price.

The first purpose built mosque in United Kingdom was founded in 1889 in Woking.

The Muslim soldiers were able to prove that it was possible to be loyal to both their faith and a country simultaneously.

Jahan Mahmood who is a military historian will talk about Contributions of the Muslims in greater detail when he makes his presentation.

Now I want to talk about the relationship between the Muslim community and the Armed Forces.

I would like to maintain and strength the harmonious relationship between the Armed Forces and the Muslim community.

I am actively involved in promoting this, both on the ground and at the various meetings that I have addressed. I am committed to this cause; in fact, I am wearing a Royal Navy tie given to me by Commander Richard Moss after a recent talk I gave at HMS “President”.

I was in fact present when Lord Richards launched the Association and became its founding Patron.

I am very pleased that the Armed Forces Muslim Association has been moving forward since its inception.

The Association has organised several activities which I have attended and I will support them as much as possible.

You will notice that I am wearing a Royal Navy tie which was given to me by Commander Richard Moss after a recent talk which I gave at HMS Preisident.

I have also been given a RAF tie and and handkerchief which was presented to me by Squander Leader Zahour Hussain.

Unfortunately Squander Leader Zahour Hussain is unable to be with us today but he and other RAF officers including a Group Captain came to see me in the House of Lords last Friday.

I would like to mention that I speak on defence matters in the House of Lords from time to time.

There are over 600 Muslims who are currently serving in the British armed forces.

There are now nearly 2.7 million Muslims in the United Kingdom.

Muslims have done very well in every field in this country.

I would like to encourage more of the ethnic minorities to join the Armed forces and the police force.

Muslims are now part of the British population and it is important that we get involved in every walk of life.

It is also imperative that we must maintain and strengthen the relationship between the Armed Forces and the Muslims in the country.

I am sure that Brigadier Alastair Aitkens and Captain Naveed will talk about this matter further.

As we with members of the Armed Forces and there is fighting in Syria and Iraq I would like to focus particularly on the role of Islam in the conflicts we are seeing in the Middle East.

I believe that it is important for the honest, peace-seeking, law-abiding majority of Muslims in this country and overseas to speak out against those who commit evil in the name of our religion.

The so-called jihadists in Iraq and Syria do not understand the principles of Islam.

They are harming women and children, forcibly converting people of other religions to Islam and committing barbaric acts.

There are clear rules of engagement in Islam relating to warfare, which were laid down by Prophet Muhammad—peace be upon him—and Caliph Abu Bakr.

Those rules include the following:

These rules of engagement were laid down well before the Geneva conventions. The acts of the so-called jihadists are totally un-Islamic and we utterly condemn what they have done and are doing.

In the 7th century when Muslims conquered Jerusalem, Caliph Omar signed the first Jerusalem declaration, which preserved the rights of existence and ensured the well-being of everyone in Jerusalem.

Subsequently, when Saladin conquered Jerusalem in 1187, he allowed people of all faiths to live in peace.

Before him, when Christians conquered Jerusalem in 1099, they mercilessly massacred all Muslims and Jews. In time of warfare Muslims should follow the examples set by Caliph Omar and Saladin.

The so-called jihadists are forcibly converting people to Islam. That is not allowed in Islam. It is written in the Holy Koran that there is no compulsion in religion.

In regard to treatment of non-Muslims by the so-called jihadists and our relationship with other communities, I emphasise that it is written in the Holy Koran that Allah says:

“O mankind! We created you male and female and made you nations and tribes, that you may know one another”.

We live in the United Kingdom, which is very much a multicultural society, and it is important that we maintain and strengthen relationships with everyone in the country.

Unfortunately there is a tiny minority of Muslims who have committed acts of terrorism in the United Kingdom and also countries overseas. Islam forbids act of terrorism and suicide bombings.

It is written in the Holy Koran:

A tiny minority of young Muslims in the United Kingdom have chosen to join terrorist groups overseas.

These young people have been radicalised. Parents, community and religious leaders have a role to play in ensuring that individuals do not fall prey to extremists’ teachings.

We must listen and communicate with the younger generation and gently put them right in order that they can follow the right path.

We need to ensure that the imams are appropriately trained and can effectively communicate with the young.

I am very keen that we interact with the Muslim Youths and promote them in every way.

I am very glad that our MC today is Zaniab Sheikh, she is indeed one of the many young Muslims who are progressing well in United Kingdom and we must all encourage them in every way we can.

Below are some pictures taken during the event.

A view of the room as the guests assembled. 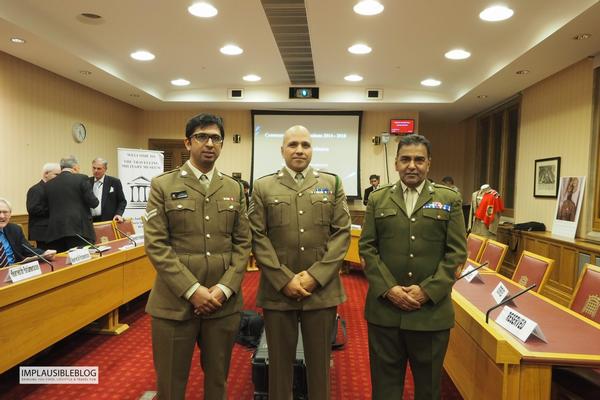 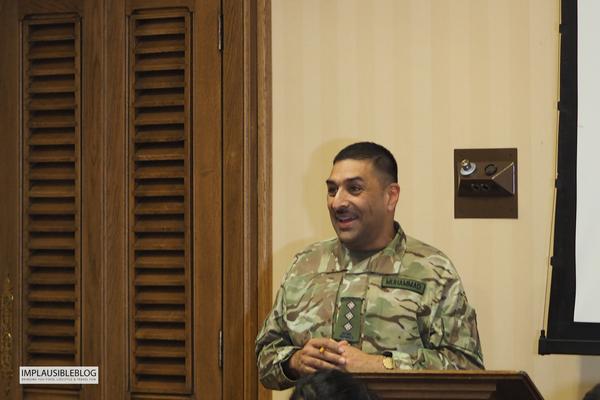 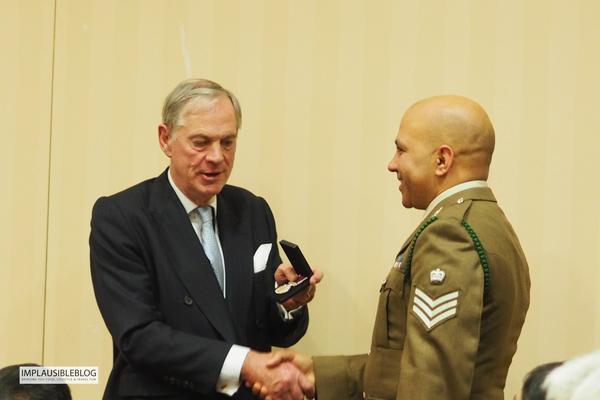 A group photo including a Muslim veteran. 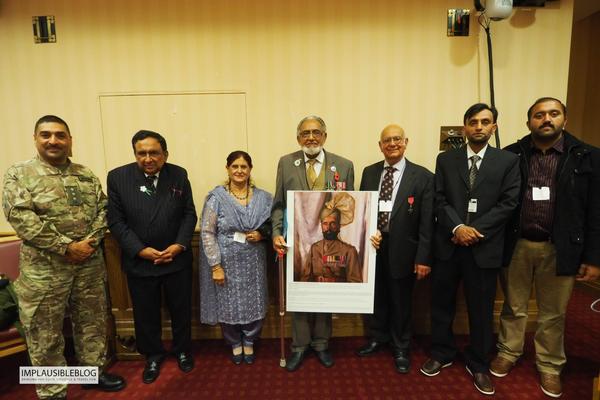