A literary and cultural evening was held on 24 October 2013 at the House of Lords. This was a first for the CMF but hopefully will not be the last.

Lord Sheikh, CMF Chairman, described how the idea germinated after the splendid Mughal Exhibition at the British Library a few months ago. He described how impressive he found the manuscripts displayed, depicting the events in the life of the last Mughal Emperor, Bahadur Shah II, and his expression of sorrows.   Dr Alam Ara Khan, a member of the CMF Executive was asked to organise an event to remember him. Thus ‘A Tribute To The Last Mughal Emperor and a traditional Urdu Mushaira’ was assembled by her in the grand surroundings of Committee Room G of The House of Lords.

To commence Dr Javed Sheikh Recited the Holy Quran and Dr Salma Iqbal gave a Naat in her melodious voice.

The Tribute  was given by Dr Khan who talked about the life of the last Mughal Emperor, Abu Zafar Sirajuddin Mohammad Bahadur Shah II, a poet king who used the title ‘Zafar’.  She took the audience down memory lane describing his personal attributes and his reign in Mughal India where he had assembled a court of cultural brilliance in Delhi. He was a kind and compassionate man, a patron of artists, a skilled calligrapher, and an accomplished poet. However he was not a general capable of leading armed forces.

Dr Khan described the tragic fall of the Mughal Dynasty that had lasted over 300 years, and had encompassed centuries of culture and learning of which Zafar was the last torch-bearer. After his defeat and surrender to the East India Company’s forces he was exiled to Rangoon where he remained prisoner in penury and was buried in an anonymous grave after his death in 1862. She complemented her talk by punctuating it with Zafar’s poetry.

The second half of the evening consisted of the Mushaira where twelve reputable poets based in the UK read out their work,  demonstrating the high calibre of their scholarship. Some recited in melody. The Mushaira was chaired by Mrs Muhsina Jilani and compered by Dr Ahsan Zaidi.  Mrs Sabeeha Siddiqi sang the words of the famous poets Zauq and Ghalib from Zafar’s Court.

The audience appeared mesmerised by their performances and participated appropriately.

The ambience, the excellent poetry, the history of the past, the grand setting, the polished audience, all succeeded in creating an atmosphere appropriate for the memory of an emperor.

Assessing the feelings of the audience Lord Sheikh suggested holding a similar literary event next year.

Our particular thanks go to the CMF administrator Mrs Shaheen Mahmood who ensured that all went smoothly with elegant catering. Lady Sheikh closed the meeting, within our allotted time thanking all the participants for a most enjoyable evening.

In the group photograph below are: 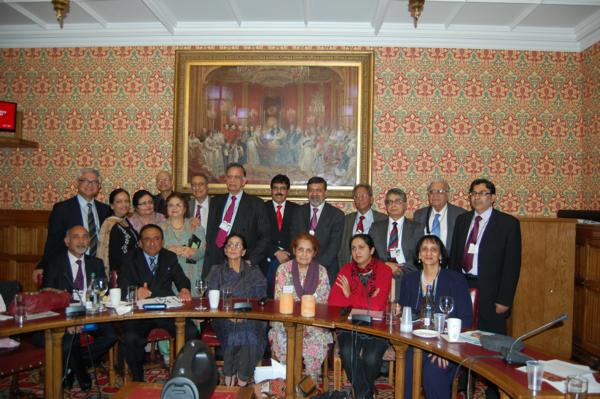